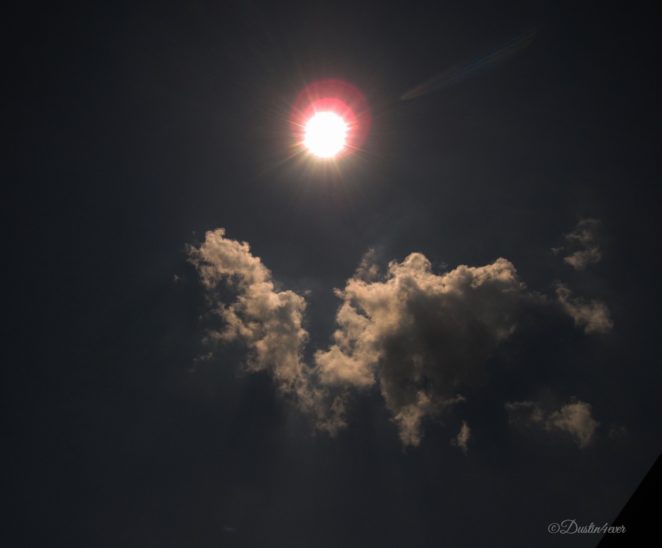 Most of North America just witnessed a total solar eclipse! The eclipse reached Oregon around 10:15 am, and it moved all the way across the US to Charleston, South Carolina at a speed of 1502 mph and about 70 miles wide. For about two minutes in certain areas the moon completely lined up with the sun and created total darkness. The area I live was about 30 miles off the “totality path” so we only got a very small part of the eclipse. The temperatures dropped about 5 degrees and it got a little darker than usual. This is all I could see from my deck.

Others were able to get amazing photos. Can you imagine seeing complete darkness for over two minutes in the middle of the day? Even stars and planets were visible in those areas without clouds. But I did not feel like fighting the hundreds of thousands of people to see two minutes of totality. I am watching it on television. Also, NASA has images on their website of the eclipse. And students at NASA sent high-altitude helium and camera filled balloons from 20 locations into space to film the event. It will be amazing to see what they filmed.

It was dark in the totality locations for a little over two minutes. There are stories about how animals react to this change. The whales and dolphins reportedly come ashore for the two minutes of darkness. Amazing how much we learn from nature. This amazing event will happen again in the US in 2024. Stay tuned!