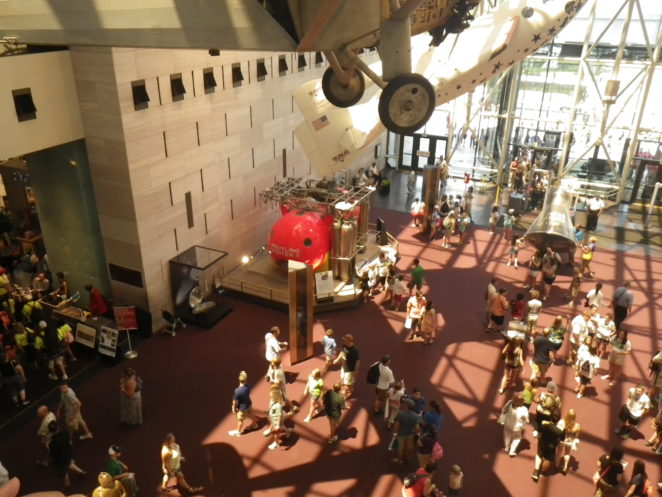 Yesterday I was walking around Downtown Washington, DC. It is getting closer and closer to full tourist season. Although, in fairness to those that do come, DC is much nicer in March (after the Cherry Festival) and April than it in late May. Once the thermometer starts to rise, DC can become very uncomfortable quickly. Anyway what I noticed but I didn’t take a picture of, was that all the school groups had color matching shirts. I was thinking about that for a second, and I realized in the modern world where fear of losing a kid is huge, having all the kids wearing bright orange shirts lets you quickly count the kids and make sure you have the right number. Human’s do the eye dart of predators, having a color we are seeking makes that easier.

The other option that I saw as I came around the national mall, however, was even cooler. I saw a teacher with an iPad watching the group of kids. The kids were all eating lunch; the teacher had a screen on her iPad that I had never seen before.  It was a tracking application that showed all the kids on the screen. We chatted or a couple of minutes. The other parents were around the edges of the group as they ate lunch. I did tell her if she needed to break away and stop talking, I wouldn’t be offended. Mostly I was curious how they were tracking, and did the tacking work indoors. I could hear Alex Ledante’s voice in my head also, but I didn’t ask the Alex question (this feels little big brothers)!

They are using a Bluetooth tracking device, and as long as the device doesn’t stray more than 300 feet away from the iPad, the kids are noted. Indoors or outdoors, the system worked pretty well.

From a let’s keep students safe perspective this feels like a good thing. The other side of this, however, if you do this with your children or coworkers. If it is for your children, I don’t think it is an issue. If you are tracking your co-workers for their safety, that is also ok at least IMHO, that said, the person being tracked has to know up front that they are being tracked.

Oh to live in interesting times…