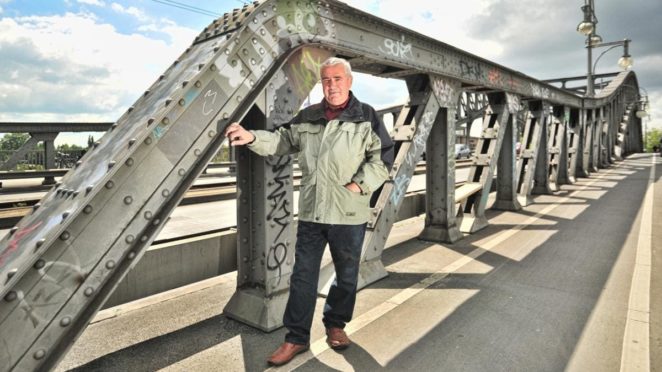 Watching the leaves fall from the trees and the wind blowing across the yard today. Made me start thinking of how there are many winds of change. Past and present history.

The photo shows Harald Jäger on the Bornholm Bridge, 2014. On November 9, 1989, in defiance of his Communist bosses, he opened the largest checkpoint of the Berlin Wall to let East Germans pass freely to the West.

Sharing a little history with some of you about the fall of the Berlin Wall.

Thousands of celebrants climb atop the Berlin Wall in front of Brandenburg Gate on the night of November 9th, 1989. (Photo below)

Crowds had flocked to the border crossings after a botched news announcement spread rapidly that the East German Government would start granting exit visas to anyone who wanted to go to the West.

Fortunately for Jäger, the collapse of the regime meant that he was never punished, although he did put himself out of work and never again held steady employment. He eventually retired to a small garden cottage near the Polish border, gradually becoming forgotten. But the consequences of his actions, combined with the broader historical forces involved, remain with us today. A combination of great and small causes had, for once, given the history-making night of November 9th a happy ending.

It is one of the tragedies of the present day that the peaceful relations between Europe and Russia engendered by the wall’s collapse are once again coming into question.

There is a lot to this story. I have provided a link if you are interested in reading more.

Factors Behind the Fall of the Berlin Wall