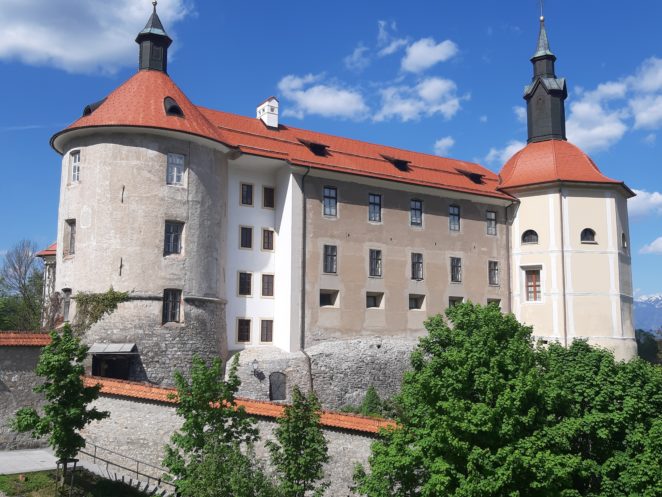 The castle was mentioned for the first time in the documents in 1215 and took a more significant role after 1511, when the earthquake broke down the Upper Tower on Krancelj. The settlement itself under the Loka castle began to emerge in the 13th century, mostly inhabitants of traders and craftsmen.

The Loka castle was nationalized in 1803, at that time it was also the official end of the Loka dominion. The state arranged various offices in the premises of the castle, from the tax office, the court to the land register. In 1870, the town was purchased by Fidelis Terpinc, and five years later Emilia Baumgartner became the owner. In 1890, the castle went into possession of Ursulink, which was bought by Emilia Baumgartner’s daughter. Uršulinke started the renovation of the castle, the work was entrusted to the architect Viljem Treu. He gave him a link with the monastery in the center of the city, but he also demolished the middle tower, built a narrower and higher belfry. In 1893, the renovated building was blessed by Jakob Missia. During the First World War, a military hospital was in the castle.

During the two wars, urslinke continued their education and schoolwork. In 1941 they were abandoned when the Germans occupied the castle. Immediately after the war, there was a collection center for returned homebuyers, prisons for German prisoners of war and a penitentiary institution. In 1959 the town was taken over by the municipality. At that time, the Loški muzej started to work with him, and the castle was dedicated to museum activities.