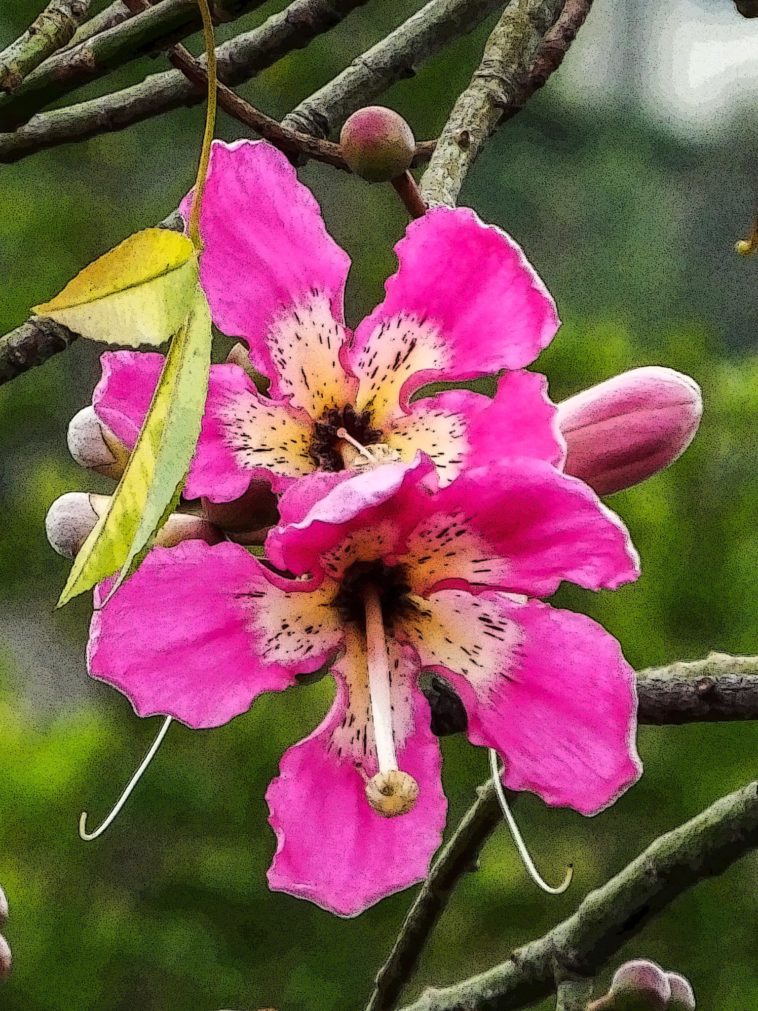 Pink is the color of passion is an Aerosmith, the song lyrics go as:

Pink it’s not even a question

Pink on the lips of your lover,

‘Cause pink is the love you discover

Pink as the bing on your cherry

Pink ’cause you are so very

Pink it’s the color of passion

“Cause today it just goes with the fashion.

Pink it was love at first sight,

Yeah, pink when I turn out the light,

And pink gets me high as a kite

And I think evertyhing is going to be all right

No matter what we do tonight.

You could be my flamingo

“Cause pink is the new kinda lingo

It’s kink – but you don’t ever tell her

I want to be your lover

I want to wrap you in rubber

As pink as the sheets that we lay on

“Cause pink is my favorite crayon, yeah

Photo: I used this for the cover and the sky seen from my backyard.

Below are some pink facts along with some pink pictures.

A special thanks to Indexer for pointing out that a color was not a noun but an adjective.

1. of the color pink

1. to perforate in an ornamental pattern

2. to cut a saw-toothed ege

3. to wound by irony, criticism, or ridicule

1. any genus of the Dianthus family, and herbs having pink, red or white flowers

2. any group of colors bluish red to red in hue, of medium to high lightness and saturation

3. a ship with a narrow overhanging stern also called a Pinkie.

Photo: This is a view from my desert property. The low white wall in front is actually horse watering troughs.

Fact: The word came from a flower called Pinks in 1681 which was in the Dianthus family.

Fact: Flamingos are born white, and get their color from what they eat.

Photo: Penny the dog has a pink bed she sometimes shares with the staff.

Fact: Pink is considered the most delicate of colors.

Fact: The people in China wer not aware of this color until western influences.

Fact: Pink is the most common color of flower sent to someone.

Fact: In parakeets if the top of the beak is pink the bird is female, blue, male.

Fact: in 1963, Cadillac came out with a pink Cadillac.

Fact: Pink signifies Spring in Japan because of the pink Cherry Blossoms.

Fact: Sunrises and Sunsets are pink because as sunlight travels through the atmosphere some colors are scattered out of the beam by air and airborne molecules and particles. This is called the, “Rayleigh Effect” Colors with a shorter wavelength such as green and blue scatter more strongly and are removed from the light that finally reaches your eye. At sunrise and sunset, when the path of sunlight through the atmosphere to the eye is the longest with blue and geen gone the longer wavelengths of orange, red and pink are left.

Fact: Bubble Gum is pink because in 1928 Walter Diemer, an accountant for Fleer Chewing Gum Company in Philadelphia was attempting to create a gum that was less sticky and more stretchy. Yet he didn’t like the color so he used what food coloring was on hand at the time, which was pink. The color kind of caught on.

Photo: A pink Bougainvillea Bush in the rain taken from the car window.

Photo: The flower from above.

Photo: Art edit on a Pink Bougainvillea Bloom in the rain.

Photo: Pink sunset on the sand.

Photo: Off the beaten path, my daughter and law and I take a break..

Pink Places: There are pink beaches in the Philippines on the great Santa Cruz Island.

Photo: White Rose blushing yellow in the center to pink on the edges.

Fact: A pink slip means to be fired from a job.

Last fact and photo: Pablo Picasso had a rose period featuring orange, red and pink from 1904-1906 following his blue period.

I hope you have enjoyed my rainbow period!!