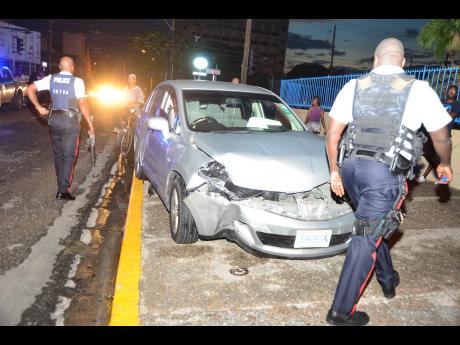 Jack prowled his living room as a caged wolf. His wife and children lounged on the sofas talking, laughing, but he couldn’t stay here.

“I have to go… um… got to make a… a drop off…” he babbled, leaving the room, ignoring the voices of his wife and sons who said something about it being Christmas Eve.

His girlfriend, the nineteen year old he’d met on the beach in Montego Bay last year, would be alone on Christmas. That was all he thought about as he began the cross island drive from Kingston.

Jack and his wife, Mavis owned a successful travel agency in Kingston. They took in a lot of U.S. mega-bucks.

Instead of parking the money in a bank or selling it at rate, he would drive nearly one hundred and eighty two kilometers, sell the mega-bucks to a ‘businessman’ in Mo Bay, and reap a nice profit.

The money stayed off the books. Jack was doing well.

He’d been doing the money run for years. Everyone knew him. Knew his car.  He had bought an apartment in Montego Bay not far from the beach.  He mixed his business with pleasure.

He’d seen Chrissie at a Hotel bar, and she give him a pretty smile. It didn’t take long for him to forget his wife and sons in Kingston.

He moved her into his apartment and paid her bills. He strove to spend every weekend with her, leaving town on Friday, returning home on Sunday.

A couple of people he no longer spoke to, had made remarks. Especially Smart Mouthed Shirley who  had said; “The only part of a forty year old man a nineteen year old finds attractive is his pocket.”

He’d have punched in her face if he had the chance, but hey, mouth was made to say anything. Jack knew Chrissie loved him. Just as he loved her. If it wasn’t for the business he and his wife ran, (in both their names) and the house they owned (in both their names) he’d divorce Mavis in an eye blink and marry Chrissie.

Jack battled traffic leaving Kingston. So many people were on the road. He finally reached Spanish town, then began the real journey, going over the dark and dangerous flat bridge, then up the hills.

It was hard driving on dark narrow roads, with traffic on coming, having to pull to the far side, either against the mountain or the precipice.

He thought of Chrissie, how sweet she was, how compliant, and kept driving.

He reached the North Coast and turned west, the highway was crowded, he had to slow down, he had to stop and it angered him for he was anxious to get to Chrissie.

Finally he reached Montego Bay. Seeing the apartment complex ahead, Jack sped up.

He didn’t see the bus.

The pedestrians saw the crash, knew who it was. Money Man from Kingston.

A few fleet footed were at the car, grabbing up the bag of money from the back seat, the thick gold chain from Jack’s neck, the bejeweled rings from his fingers. Once they were gone, someone called the police to report an accident.

There was a lot of noise outside of her apartment.  Chrissie looked from the window to see Jack’s car.  She had a good view. She saw the police, then the ambulance, and knew, just by looking, Jack was dead, or would soon be dead.

She went to his drawers and grabbed up the money she had pointedly never touched, (couldn’t make him think she was in it for the money, could she?)  the jewelry he had left there.

The apartment was in his name, his wife would soon be down on her like white on rice. She didn’t need the drama.

Chrissie packed all the things she wanted to keep, then called a friend she could stay with over Christmas.

She got into the car Jack had bought her and drove into the night, hearing the fire crackers announcing it was midnight.

Jack died shortly after arrival at Cornwall Regional Hospital. His wife received the phone call just after one a.m. which woke her from a deep sleep.

There was no reason to wake the boys, to wake anyone. Mavis lay back on the large bed. She’d wait until tomorrow… no… outside of Jack’s brother, who’d she’d call now, everyone could wait until Boxing Day.

On Christmas morning, Mavis told her sons. They had no task. Jack’s brother would handle the funeral as he owned the leading parlour in Kingston.

On December 27th,  a woman named Lynn called Chrissie. She had heard about Jack’s car accident on Boxing Day, from a mutual friend. Lynn had been acquainted with Jack and his wife for many years.

She’d been in Montego Bay a few months ago and Jack introduced her to Chrissie. They’d exchanged numbers as a courtesy. Now, it was more than that. Lynn felt that poor Chrissie would be totally devastated that her beloved Jack was dead.

And what would happen to her now? Living in an apartment Jack owned… did he put Chrissie’s name on it or would it go to Mavis, and Chrissie find herself on the Street?

She dialed the number, Chrissie answered. There was so much noise in the background, she could barely hear.

“Where are you?” Lynn asked, worriedly.

Lynn stood in silence, it was surreal.  Jack died just before the 25th of December.  This was the 27th.

“I called to find out how you were bearing up…” Lynn muttered.

Lynn stood with the dead phone.   The words of her friend Shirley echoed;  “The only part of a forty year old man a nineteen year old finds attractive….”