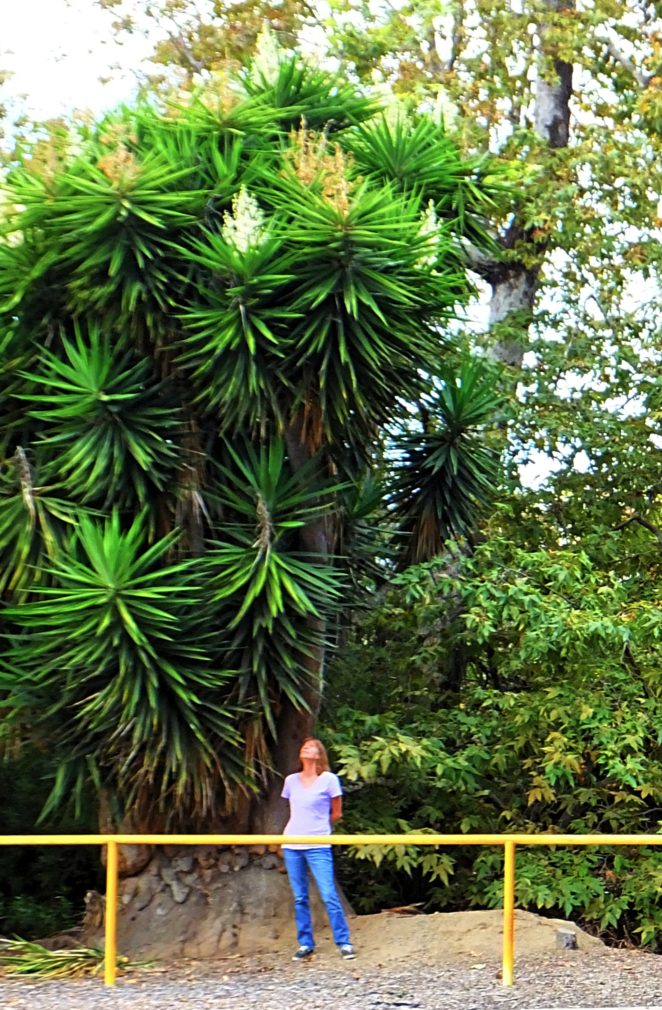 Green is not only just a noun now days, but is a verb as well. Go Green means to pursue knowledge and practices that can lead to a more environmentally friendly and ecologically responsible decisions and lifestyles, which can help protect the environment and sustain it’s natural resources for current and future generations. I am very green as you would say.

Photo: Here I am checking out the blooms of this giant Yucca Tree.

Fact: Blue and Yellow make green in pigment, but Green is a additive color in the light spectrum along with blue and red. Meaning you mix these three colors to get all the others.

Photo: This plant lives off of the host tree without harming it.

Fact: Plants are green because they have green Chloroplasts which are organelles that carry out photosynthesis.

Fact: Photosynthesis is a process used by plants to convert light energy from the sun into chemical energy that can be used to fuel plants. The light energy that plants capture is called visible light. The white light that shines on the earth is composed of many different colors. Photosynthesis captures visible light but does not use all the colors equally but mostly uses blue and red parts of the spectrum. Plants are green because chlorophyll reflects green light.

Fact: Green is the second most popular color worldwide with blue being number one.

Photo: Art edit of Blue the cat with her green eyes.

Fact: Only 2% of the worlds population has green eyes. If you have green eyes it is considered extremely rare.

Photo: I liked this one because of the lack of color which really makes her eyes stand out.

Fact: My eyes are green.

Photo: Both of my sons have green eyes as well, here is my youngest holding up a green pine cone from a Star Pine.

Fact: Traffic lights are green in all countries.

Photo: California Waves at the Beach

Fact: Green was the color of the skies in the Ming Dynasty.

Fact: Coca-Cola was the first one to put Santa Claus in Red, before that he was in a green gown.

Photo: We have a lot of green around here in San Diego County California.

Fact: Green was the preferred color in the United States for wedding dresses in the 1400’s.

Photo: The ever elusive Butterfly…

Fact: In North America green signifies a rise in the stock market while in Asia it signifies a drop.

Photo: My first tomato of the season is getting big.

This article in green will be continued… Go green!