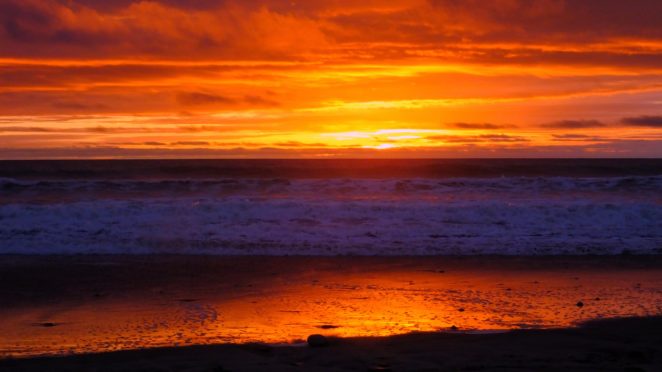 You either highly dislike it or love it. I love all of the colors of the rainbow for certain things.

I wouldn’t paint a house the color orange, but I love orange flowers and sunsets. I even like those burnt orange metal flaked cars!

Here are some orange shots I have taken with some very orange facts.

Photograph: A orange-red sunset off the Oceanside Coast in Southern California for the cover.

Fact: When talking “pigment”, orange can be made by mixing red and yellow.

Photograph: One more sunset off the coast in a yellow-orange tone.

Fact:  When talking “light”, orange can be made by mixing red and green.

Photograph:  This is what is referred to as a Sun Dog.This one is a orange sun dog. A sun dog is a atmospheric phenomena that occurs when light is reflected or refracted by ice crystals in the atmosphere. Usually seen in a 22 degree halo like this.

Fact: The term orange was first used in the early 1500’s and is taken directly from the French word “orenge” in reference to the fruit of the same color and name.

Photograph: Below is a mural in Oceanside, California.

Fact: Realgar, Orpiment and Crocoite are all minerals that were used to create paint, while Turmeric and Saffron were made to dye clothes the color of orange.

Photograph: Nasturtium flowers are taking over!

Fact: Most orange flowers, fruits and vegetables have a high carotene content and are good for your health.

Photograph: View from my back yard.

Fact: Orange robes are worn by Buddhist Monks and represent commitment to perfection!

Fact: Originally carrots were not orange. The most common color was purple.

Fact: Orange is the only color named after an object. An orange fruit.

Fact: Orange is the color of life rafts, traffic cones, Halloween and Cheetos.

Fact: Most prison uniforms are orange in the United States.

Fact: Orange is the color of the Royal family in the Netherlands.

I hope you liked my orange tour.. Next is yellow!