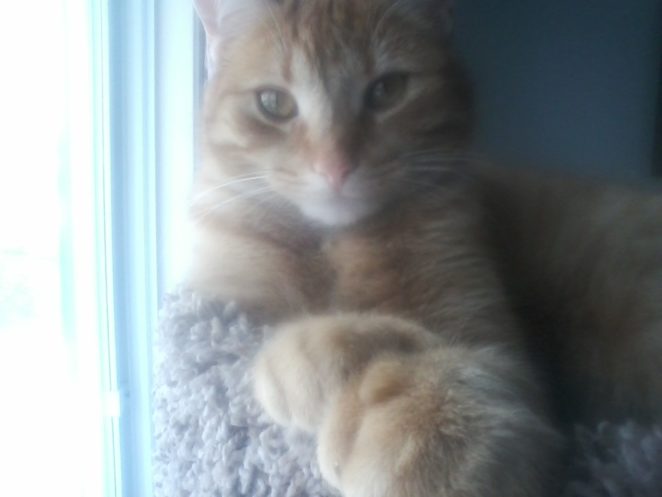 Runt is not a king or an emperor or a historical figure. Runt is my cat. But what makes him so special, you might ask? Well, the circumstances of his birth and his physique all make up for his being precious and dear to me. Runt is a runt in more ways than one. Let me tell you why.

Lilly (or Lyllipad as I often called her) is Runt’s mother. She gave birth on Saturday the 15th of March 2014 to three kittens which we called (my ex-husband and I) Bear, Flash and Brandy. Bear was the biggest and the fluffiest of all three. Flash was a real get up and go kitten from the first day. Brandy, the little girl kitty was the colour of brandy. So, we had three kittens and Lilly and Mitten from her first litter.

Monday morning, I woke up and checked on the kittens and Lilly. Everybody was bundled up in their bed and feeding while Mitten was looking on the side. So I went downstairs to do the laundry and then had a cup of coffee and a cigarette. Sorry to say this but yes, I am a smoker.

Approximately one hour after, I went back upstairs and did the bed. Then I went to look in on the little family. Lilly was gone but the kittens were there. But, what… I did a double take and a triple take… there seemed to be four little balls of fur and not only three. So I pick them and separated them and lo and behold there is a fourth kitten. Runt was born almost forty eight hours after his two brothers and sister.

Runt was then really a runt. But his physique is also different. Runt is a polydactyl cat. He has five digits on both his front paws, or the thumb as most people call them. He also has six digits on his right back paw and five digits on his left back paw for a grand total of 21 digits compared to the normal 18. Maybe I should have called him Snowshoe then but I did not think of it and I rather like the name Runt. Also, Snowshoe would not be appropriate for Runt because I have seen him sink in light snow even with big “snowshoe” like paws.

At a very young age, Runt was kind of a shy cat with his siblings but eventually started to slowly join in with their play time but only if I was around, because he would dart in the group and give a couple of swats to the others and immediately retreat towards me. What a cutie pie he was.

Today Runt is a strapping big orange tabby cat with a whole back yard and a house to play in. But he will never know the pleasure of a female because we had neutered to keep him close to home and to diminish the possible fights with other male cats although I bet that with 21 claws I am sure that he would have emerged the winner.

And that is the story of Runt. Hope you enjoy his picture just has much as I enjoy him in person. I mean, who can resist that beautiful face…. and those big paws…