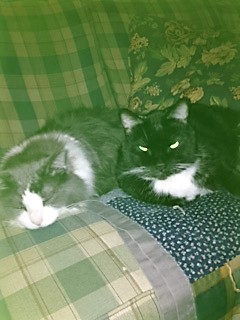 It has been said that animals could get whatever humans can get. Does the author believe this to be true?  Yes, she does!The author has a cat, and this cat started walking funny one day. First, she thought it was from his diabetes, but it was something else.

The vet told me that my cat was walking fine because he has a knee that goes out of joint ever so often.  She told me that it would go back into place eventually.

The author thought he was going to die. He is over 20 yrs. old. She found out he would be alright after a while.

The author’s cat just wants to be near her even more since he has developed this knee condition. He doesn’t seem in pain when his knee goes out.He walks around a lot which is a good thing she thinks.

They know how to love

Treat your pets with tender care

As they would for you

The photo belongs to the author LaJenna.