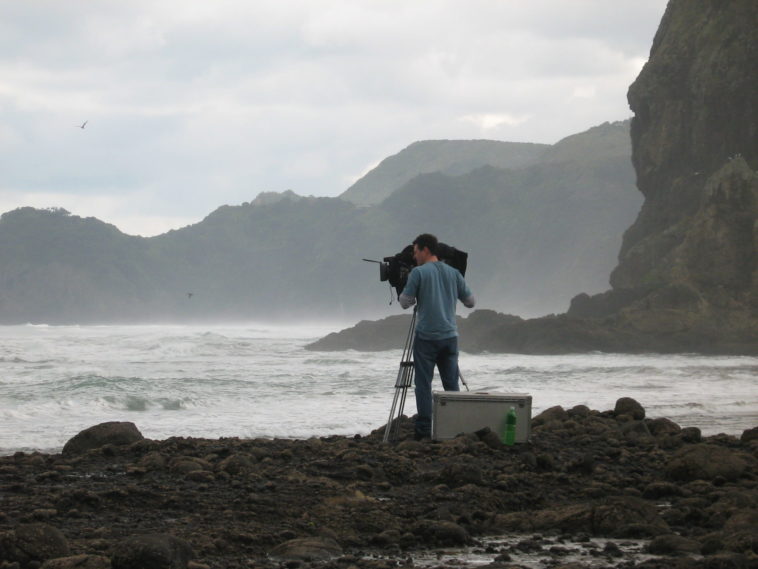 I have taken stock of the vast amount of my photos, that need to be looked through and re organised and edited again. These are some that I have in the early presentations of photography and images.

So I share because the beauty that is around us is often taken for granted and it’s important to say, “Thanks” and realise that it’s great to live in our own parts of the world where seeing scenery is free and bringing these special pictures forward may influence others to retain a Healthy and Clean environment for future generations and to learn from the beauty and nature around us.

This is a lone Photographer with expensive equipment standing on the rocks of Piha beach. I think it’s amazing what you can catch in one space of time. It’s a normal day for Piha, but the strength of the Tasman sea coming into the rocks is as constant as the Moon and Tides. The Tides of the sea in all of the world is dictated by the gravity pull of the Moon.The New Zealand Maori people arrived here first as far as we know in their canoes. It is thought that they came from the direction of the Pacific Society Islands or Tonga or Rarotonga. The language of the Maori is like but not the same as the Tongan person through the similarity of words. Now it’s fair to say here, that the Ancient Maori people were very wise and in tune with the weather and the phases of the Moon. The Maori People in ancient times always fished according to the Moon. They are usually always right.

Piha Beach is West Auckland by the Tasman Sea. The Tasman Sea is known to be treacherous, because of the huge number of people who died by drowning entering the Western Harbours. From Auckland Sydney in Australia is 2 hours flight by an aircraft or else 4 days by sea in a boat. New Zealand is known as “The Drowning Country!”. You are safe on the beach if you take care and are alert to what is around you, take notice of the life guards who are highly trained with your personal safety in mind.

This is an Estuary coming into Wairewa, North of Auckland. You are looking at some Mangroves and the time I took it was a foggy day. “Wairewa!” means, “Hot Water!” in Maori, which is true because nearby are natural hot springs and as a child we sometimes came here to go Swimming in the Wairewa Hot Pools. They are still here today.

We stopped here on the side of the road, at the time we stopped some people had a van to sell various types of fish in this car park. I took some photos here and then we drove North.

Wairewa is North of Auckland by about an hour on the East Coast.

This is known as “The Gap!” at Piha Beach. You go into the main Piha Beach by only one road, and in the past it was a metal road winding through a very steep cliff face. There was a huge boulder sitting over one part of the road and it was a scary experience when being driven underneath it. Now the boulder has been blown away by dynamite and the road here is upgraded by still winding through and down a very steep cliff face to the beach.

You have to walk to the Gap through the beach at low tide and it’s important to make sure you are not trapped by the tide coming in. It takes about 20 minutes to half an hour to get to the gap. You climb over rocks and I photographed some pools and scenes on the way. You come to a lagoon that is created by huge waves crashing over the rocks. If you can see in your mind a roof top and the size of the house, that is the size of this wave. It crashes with incredible force and it’s possible I could stand for hours watching it.

I once swam here with my siblings as a child and was told it’s best not to swim until half an hour after eating lunch or else you risk getting muscular cramps ( which is very painful).

This is one of my first scenic watercolours, but I have been drawing and painting people from a child. Scenes was not on my child hood list and now they are. Good art work takes time. This painting is a scene from Piha Beach taken from my photos.

This is a drawing of a Croatian woman, I was here to help here. She insisted on giving me lunch but she could see the flies as she was blind. She made everything and did everything herself. That included wall papering, putting in flooring, painting her house, doing all of the gardening and she made all of her own clothes. She came to New Zealand as a teenager from Croatia and we called that, “Yugoslavia”. I don’t know their circumstances, but have always admired their hard work and skills. She taught me how to paint houses so that if I painted with 2 different colours the lines were neat and tidy. She showed me many things.

As for the drawing it was of my first of an older person. She has a quiet strength about her.

My elder sister Felicity in her wedding dress, at Taupaki, Auckland. It was taken in the late1970’s. Today we are in our 60’s. It was done in dots by hand in 1987 to get entrance to a Graphic Design course. I had one chance in 6 to gain entrance. I got in by a series of pictures I did myself.

Dot pictures take time and a lot of patience. In those days, you had to do everything by hand and whom ever required something like this, wanted it yesterday.

You could earn quite a lot of money by Graphic Design but it was at a time where computers took over. I got offered a job in a Newspaper  office and in a year, that firm went bust, they became bankrupt and for some reason, I knew it was not right for me.

Im grateful for the lessons here to be learned.