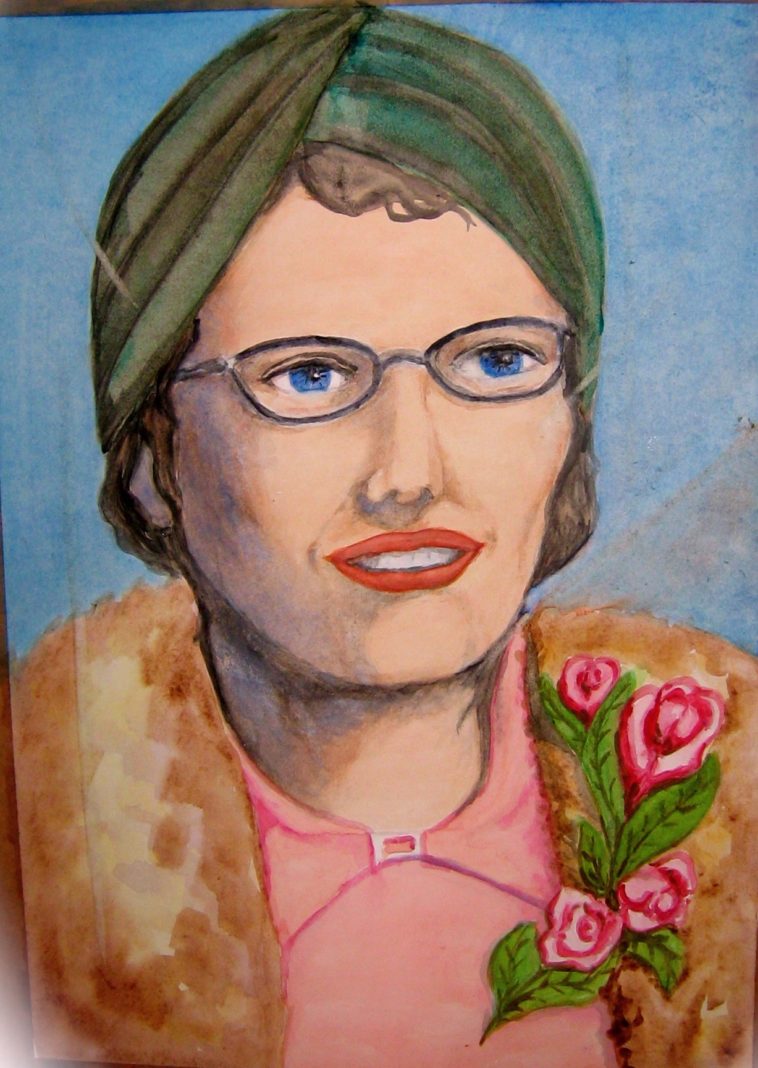 I am a care giver or was. To do care giving in Auckland, New Zealand, having a car is essential. You get up in the morning and very often you don’t know where you are going to turn up, often in a house of a stranger.

Now, at the time I was working for 2 care giving agencies. I was directed to two houses of women who had broken their pelvis by a fall. How does a person cope with a broken pelvis, I don’t know.

Now, Ollie was one of 2 people who had broken their pelvis by a fall. She was a short woman under five feet. I met her at the door. The picture above is my impression of Ollie but it isn’t her, this is a painting I did of my grandmother, Dorothy Ingelby Moresby (nee Miller). Ollie would be much shorter. Ollie had white hair. (I never got to know my lovely grandmother, but Im told she was a lovely woman and I believe it- she died at 56 years of age of cancer)

“You have white hair, so you are seventy at the most!”

Ollie did not have a line on her face. She looked very well. Ollie had a broken pelvis and I was told it heals by itself. Ollie had my help but she lived on her own. She was a very brave woman.

Ollie told me that she was an identical twin and as a twin they got work for advertising companies all their lives. I saw their photos and they looked beautiful. She had a drawing on her wall of “Whist” but I did a drawing like it but not the same in conte .

It’s my drawing of identical women but not quite in three ways. Her Whist image was different where the hair was blown all over the place.  Whist was blown by the wind. Mine is reflections.

Now here is a beautiful story. When Ollie was born she weighed 2 pounds and the Doctor told her mother and father that she would not live, so they should bury her under the apple tree. So Ollie was named like this, “Oh live!” Glad us!” Thus she was named Olive Gladys!

On another note, what brought this story this day is what I read, out of “The Daily Light” a baby was on the ground barely alive and left for dead in the desert, but God went past. In his great compassion, he takes the baby and says, “Oh Live! Brings the baby up as his own..

Ollie had wonderful parents who never abandoned her and loved her and her twin sister in Auckland. They did not give up on her, when the Doctor told them that Ollie would die. Ollie told me wonderful stories and all of them was about love. Ollie loved everyone and most who knew her loved her back.

God honoured Ollie parents because they did not give up on their own and their love was their legacy, much more precious than property.

. Love is the greatest gift that you can give to anyone. Here is a painting by me, a Rose. Ollie was a beautiful woman and to me was as a beautiful Rose.