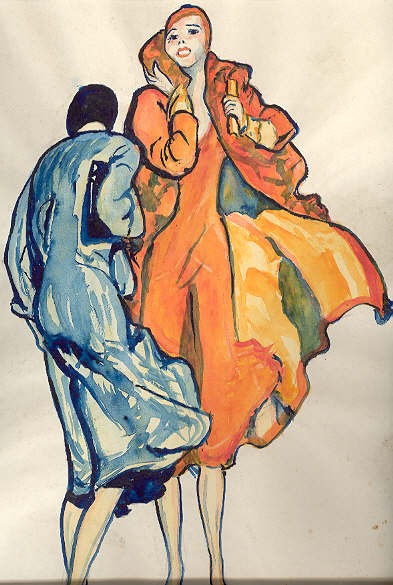 Here I will speak of my art work and obsession with these subjects, so this first one I shall speak of is “Aragon of Arathorn”  a hero in “Lord of the Rings”. He is going through his chainmail. He is about to go to battle.In actual fact this man is an actor and the movie was made in my own country, New Zealand. This actor is from another character and he played, “Aragon” well. Incidentally, the name of the Actor is Viggo Mortensen.

Aragon in Tolkeins “Lord of the rings is a rough and ready ranger who defends ordinary people because of his military skill. He becomes a King later on.

This is simply a woman in a hat from a fashion magazine. I happened to like her hat, it’s a pencil drawing. A woman or man can wear all sorts of interesting clothing and from the beginning of time the rags people wear are different, as to the perception of what people think true beauty or handsomeness is.  To upgrade to modern is not necessarily the best because that old machine goes on the scrap heap for newer models.

Tell me, do you know the time when the scraps will be turned into newer models recycled?

This is a drawing from nature. Of Autumn leaves and livestock, mouse and moth. It’s a small world within a world. The world is large within a small world. Every inch of plants has cells, just as the mouse has hairs and the moth even has hairs. They are large as life to something like an ant and the leaves that have fell will soon be recycled into the ground. The mouse stays hidden in the ground from predators.

A woman having coffee in pen and ink wash. Some of these I did a while ago and I still do painting and drawing, even teach others how to do it. She is also drinking water or wine and has a companion too. I think it is wonderful that you can put so much detail into white, grey and black and the different shades. You can charge a simple 2 D object into 3 D by the use of a pencil and ink and water and a paint brush.

Every picture tells a story and this is from “Jesus of Nazareth” and here is the before and after of the blind man receiving his sight and Jesus smiles because the blind man is happy to receive his sight.   Now the drawing is placed next to archways that I photographed in Hamilton Gardens New Zealand. You see plenty of archways in Israel.

This is a water colour experiment of a woman with beads and not a dress most want to wear in public but is OK in a magazine. I used water colour and put salt on it for the drying process. I often change the appearances of my subjects if I want to. I don’t know why people want you to have to conform, when an artist is not really supposed to stay to paint by numbers. It’s OK to copy sometimes but not all the time.

Yes, I copied this idea of fashion of yesterday. Art Nouveau. It looked romantic and I liked it so painted it with gauche, a water based opaque paint. I liked the wind blowing through the folds of the material. I could see myself in the same situation in the wind.

Saruman the White as in “Lord of the Rings”, the actor was Christopher Lee who was typecast as “Bad” because he was cast as “Dracula” in the Hammer Horror films. I don’t like Horror films, but he looks good as he did in the reading of the book, “Lord of the Rings” . His voice had real power and he grew proud because he could boss people about. Unfortunately, he became very proud like a lot of people do when they think they are superior to others and it did not go too good for him. He was stabbed in the back by his slave, Grima Wormtongue.

Now I have to show you here, I don’t only copy, this one is a doodle of mine. Its an elf character from a woman’s romantic point of view. I don’t know why I didn’t draw the spear right. It’s done in blue ball point pen because at school we were only allowed to use fountain pen to write with. I never managed tidy hand writing Im too impatient and want it written yesterday.  Later on we were allowed ball point to use or biro pens. Never allowed to draw with it. I am doing here what I once was not allowed to do, so what? I like ball point pens to draw with, especially the soft shades of blue.

Who is an artist? Why we are all different and everyone is an artist at being themselves even if we fool ourselves at being con artists!

An artist doesn’t have magic in their hands or superior genes. They are simply people who love doing art work and have learned a discipline of art work in itself. Art work does not require people to have dramatic tantrums or outrageous displays. We can be at times flamboyant, but some of us are very conservative and keep our creativity for our multiple tasks.

An artist is simply a person who learns to see. There is a huge difference between perceiving and seeing. An artist notices the little details but then people often notice different details. There is a huge range of types of art work. .