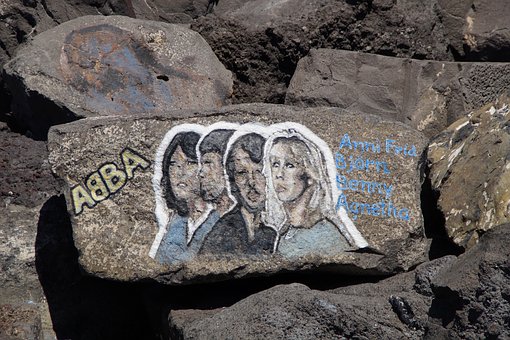 ANNI-FRID PRINZESSIN REUSS VON PLAUEN, the brunette, was born in Norway and started singing in school at an early age. At 13 she got a job as a dance band and schlager, a style of popular music, singer. She took singing lessons and later teamed up with a 15-piece jazz “big band”. In 1963, at the age of 18, she formed her own band, the Anni-Frid Four. In 1967 she won the Swedish National Talent Competition. Anni-Frid recorded several singles, toured Sweden; and then recorded her first album, Frida, in 1971. The group’s members crossed paths prior to this period; and Benny Andersson became Anni-Frid’s fiance’; and Bjorn Ulvaeus and Agneth Faltskog began dating.

GORAN BROR “BENNY” ANDERSSON was born in Sweden. At the age of 10 he bought a piano and taught himself to play. Benny dropped out of school at 15 and began to perform for youth clubs. There he met his first girlfriend, Christine and had two children with her. They joined The Electricity Board Folk Music Group which played mostly instrumental music. In 1964 they were up against another band, The Hep Stars, in a talent contest. When Benny stepped in as the Hep Stars keyboardist in October of that year, he knew he had found his calling. Andersson met Bjorn Ulvaeus in June of 1966; and they began writing songs together. During the Swedish Eurovision Song Festival finals in 1969, Bjorn met vocalist, Agnetha Faltskog.

BJORN KRISTIAN ULVAEUS was born in Sweden and studied Business and Law after doing his military service. He became a member of The Hootenanny Singers which had a huge following in Scandanavia. While on tour in 1966, he ran into the Hep Stars; and Bjorn and Benny became friends and co-composers. While filming a TV special in March of 1969, Bjorn met 18-year-old singer-songwriter Ageneth Faltskog. Benny had met his future spouse, 24-year old vocalist, Anni-Frid, just weeks before.

AGNETHA ASE FALTSKOG, the blond, was born in Sweden and wrote her first song at the age of six. At eight she began taking piano lessons and sang in a church choir. At about ten years old she formed a trio, The Cambers, which eventually fizzled out due to a lack of bookings. At fifteen Agnetha left school to pursue her music career. She performed with a local dance band for two years. The band’s leader sent a demo record to his relative who was a record producer for Copul Records. Copul was not interested in the band as a whole; but they were interested in Agnetha. Agnetha was offered and accepted a recording contract with CBS records. Faltskog had a successful recording and songwriting career which continued into the late 60s. Agnetha is also famous for her “J-Lo-like” behind.

With all the friendships and relationships melding and the determination of Stig Anderson, the manager of The Hootenanny Singers, to get the four together, ABBA was formed in 1970. They were, of course, an international sensation. They topped the charts worldwide from 1972-1982 and have sold over 375 million records. They still sell approximately 2-3 million albums a year, even though the group is no longer together.

During a promo photo, Benny flipped his “B” in ABBA horizontally just for fun; and from 1976 onward the “mirror image “B” became part of ABBA’s registered trademark.

Some of the group’s hits:  Mamma Mia, Waterloo, Voulez-Vous, Super Trouper, Dancing Queen, Fernando, SOS, Money Money Money, Knowing Me Knowing You, Take a Chance on Me, Chiquita, Thank You for the Music.