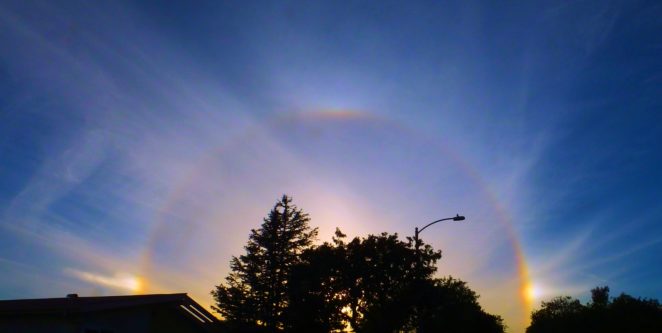 Keeping to my sky series of photographs. I thought I would share the 22 degree halo I took pictures of one afternoon/evening.  A halo is not a rainbow, or is it?

The halo is formed by ice crystals refracting the light of the sun. They form at specific distances from the sun due to the angles of the ice crystal and the degree to which light bends.

The most common and smallest halo forms at 22 degrees around the sun, and therefore is known as a 22 degree halo.

Sundogs form on either sides of the halo, level with the sun (seen in the tree, bottom of the frame). They are the small segments of rainbow colored light and are very bright, almost as bright as the sun. If you were to see the full round circle of this halo you would see four sundogs. One at the top and one at the bottom, and one on both sides.

The oldest reference to sun halos and sundogs is from Aristotle’s Meteorology, which was written over 2000 years ago.

The earliest painting of a 22 degree halo is was painted by an unknown artist and is called, ” Vadersolstalan” which means The sundog painting in Sweden.

The painting depicted a halo display observed over Stockholm on April 20, 1535 and was produced shortly after the event.

The difference between rainbows and halos are:  To form a rainbow, light reflects through water in the air, and to form a halo light travels through hexagonal crystals of ice. It also depends on the angle of light between the sun and the light phenomenon we see in the sky is different for rainbows and halos.

I was lucky enough to be able to see one of these cool halos! I hope you enjoy.