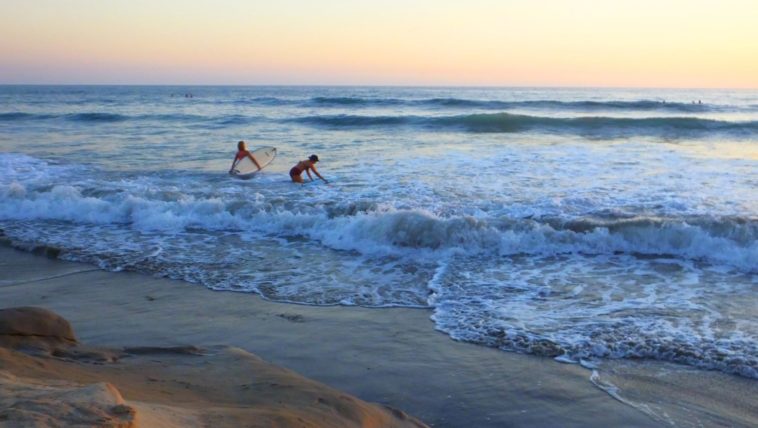 This collection of photos is from 2015, but thought they would work well in the sky series I have planned to post. I will start off on this journey waiting for the eclipse. I wanted to see the Blood Super Moon Eclipse, so we heading to the beach to first watch the sunset first, the moon was already out.

In the photo below my son and Meika my dog are seen heading down the bluff, and the moon is already visible above.

One more of the bluff and moon seen in the photo below.

The surfers heading out to catch some waves.

We were sitting on a 20 foot bluff looking down at the cove here as the beach appears from under a high tide.

The waves hit this bluff and travel south.

The power of them are felt on the bluff above as they crash with thunderous booms.

Meika was glad her beach was coming back. The sentry on the cliff.. lol

And at last, the water is getting shallow!! Yay, the beach will be here soon!

Just staring at the water isn’t fun for a wolf seal otter dog. You have to get every part of the wolf wet. From ears and nose to tail.

She loves the water and beach, you can just barely see the beach now!

She is always interested in those people on the boards..

Speaking of the people on the boards..you can see tiny surfers, those specs in the water!!..

The waves catching the light, as a surfer goes out.

Another surfer. (One for the ladies)

Oh just one more, what’s the harm. I was checking out his swim stroke, good clean strokes here, right?

Okay, a few for the guys. One lady has a camera mounted on her board, going out to take pictures and surf!

This one was cute. The girl with the blue board waving to he camera on the white board.

Getting over the waves is rough sometimes!

At last, they made it.

The sunset was starting to take on some really pretty colors.

A surfer coming in..

Getting about time for the eclipse!!

The rest is to be continued in Super Blood Moon Eclipse coming soon. I hope you enjoyed the sunset.