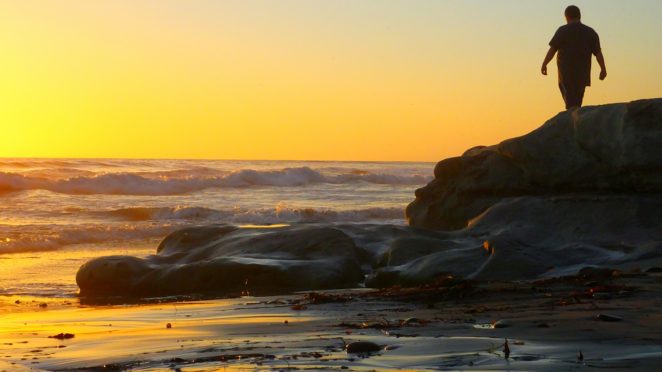 Waiting on the eclipse my son and I, along with Meika headed to the beach to enjoy the sunset.

The glow was so awesome as the marine layer was hazy and kind of foggy on the water.

I love the colors of sunset!

Waiting for darkness, the sun gets closer to the horizon.

Waiting on the eclipse, here is a bit of info.

It happened last on September 2015. The Super Blood Moon Eclipse! The last time it happened was in 1982, if you missed those two the next one will be in 2033.

We have a lunar eclipse every two years right? So what made this one special?

Well it took on a slight orange red hue, and was a full lunar eclipse that happened for over an hour just after sunset and was seen North and South America, Europe, Africa, West Asia and Eastern Pacific.

This eclipse was kind of a big deal for stargazers because it only happens under specific rare Conditions. When the moon is closest to the Earth and a “Blood Moon” a phrase meaning the 4 Lunar Eclipses seen between 2014 and 2015.

Below are some of my unprofessional photos, the quality is iffy, but I thought it was worth sharing.

Another.. You’ll notice here is where I couldn’t figure out if I needed to turn down the ISO anymore than it is but the white starts to distort, and blow out.

And then it really blows out.. Looks kind of artsy though, don’t you think?

Another, looks kind of like the old video game, “PacMan”.

Then I finally adjust the ISO so you can see the moon part, instead of the shadow. Its a learning curve.

That’s it, my battery was shot! I hope you enjoyed the Blood Moon Eclipse of 2015!