It’s been 5 months have passed since I made my blog about Virily’s latest top ten bloggers with highest-earning viril points when Virily had reached its membership to 2000 registered members. So right now, I’m back on track to give you the latest top 10 bloggers after Virily just reached its 3000th registered member whose account name is AdnanYounus174. As of 6:02 AM, Wednesday, March 21, 2018, he is the lucky 3000th member who officially registered at Virily. However, if we are going to include partially-registered members, Virily has already got 3256 members.

Based on Alexa, a commercial web traffic data and analytics site which was acquired by Amazon in 1999, Virily as of today, is globally ranked at 169,709th (158,913th spot on my previous update) position with rank-down points of 27,418 (113,894 rank-up points on my previous update). Sudden drop of position maybe due to intermittent glitches and bugs experienced since week ago.

Though Virily has recent issues today regarding some intermittent glitches or maybe bugs that sometimes happen from time to time, yet Virily has still manage to get a high global rank despite it went some few points these days. But I believe their technical staff may soon fixed these bugs and glitches as soon as possible.

Which sites did people visit immediately before this site?

So since Virily has just come up to its 3000 official members, I, Trafalgar Law, as one of its active bloggers, will going to feature also its latest highest-earning viril-point bloggers, as what I did previously when Virily had reached its 2000, 1000, and 500 members.

Here are the list of previous top 10 bloggers based on my previous ranking, which was when Virily has reached its 2000 official members:

Base on this list as from previous update, we have 5 retainers, 4 new entries, and 1 re-entry for the latest. So half from above list of top 10 bloggers before aren’t included as of now, and you’ll be surprised who they are.

Are you ready to know them one by one as we feature their profile details and some fun facts about them? If you are, then better get this page scrolling down.

To check my previous blogs about updates, just tap these following links below:

NOTE: This post was published a bit late due to system glitches. 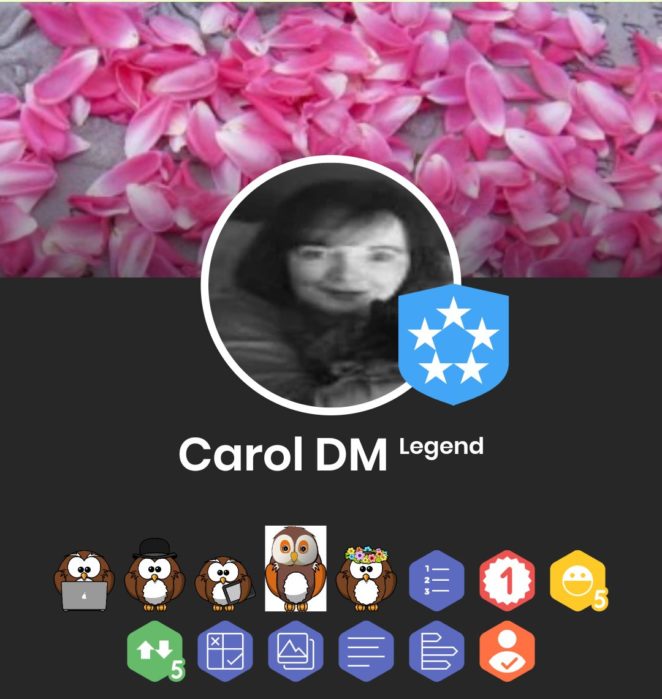 Carol DM is our newest top-earning blogger as of this latest update. She once took a 9th spot on my second update. She is the only re-entry that also took the top spot as of today. She is currently earning 182,120 viril points and counting, that earned her a 5-star Legend rank.

Her posts are mainly about flowers, cats, nature and some few quizzes. If you love nature, botany, and some feline infos, definitely Carol is a big yes for that.

Brushing Brendel was her first blog posted 9 months ago that currently earns her 21 up-votes, 95 views, and 19 comments.

CONGRATULATIONS Carol, you deserve to be on top! 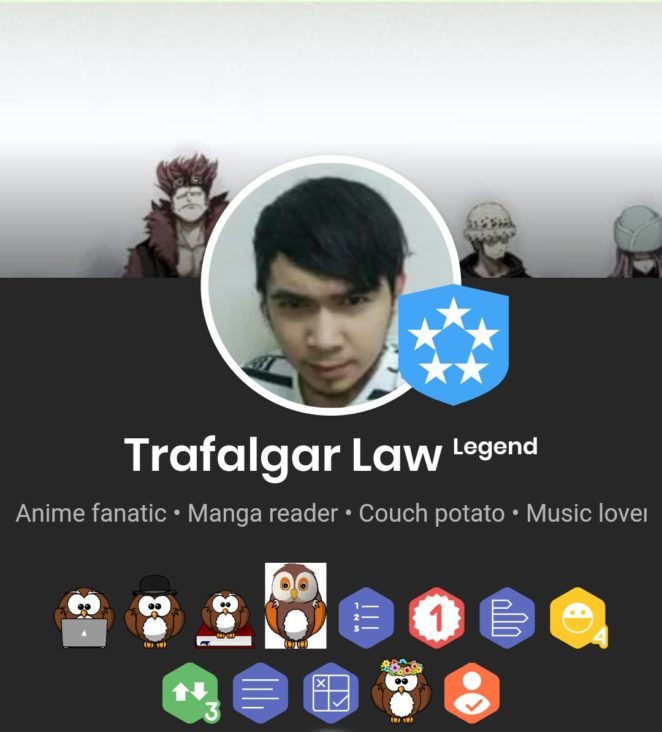 Trafalgar Law is currently earning 181,760 viril points and counting, that earned him a 5-star Legend rank.

His posts are mostly on TV  series and movie reviews, quizzes (especially Game of Thrones), animes, trivias and fun facts, and some embedded Youtube video articles. So if you are a big fan of general knowledge, mind-boggling quizzes, or latest film and TV series release, just ask Trafalgar, he might help you a bit.

It's good to be back! Actually it's me guys! haha 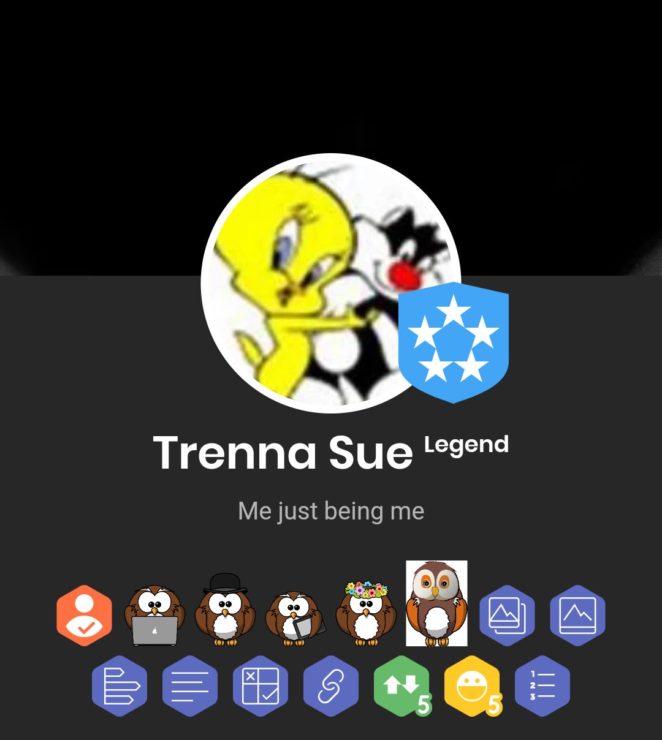 Trenna Sue is the highest and one of the newest bloggers to make it at top 10. She currently earns 181, 093 viril points and counting, that earned her also a 5-star Legend rank.

Her posts are mostly on life, tutorial, feature, polls, editorial, music reviews, movie trailers, and some embedded Youtube videos. If you would like to ask about what's hot and what's not about some latest lifestyle stuffs, just ask Trenna, she will really give you lifesaving tips.

Splender of Fall was her first post published 5 months ago that currently earns her 12 up-votes, 6 shares, 169 views, and 9 comments.

Welcome to the list Trenna Sue. Your efforts and activeness have paid you a reward. 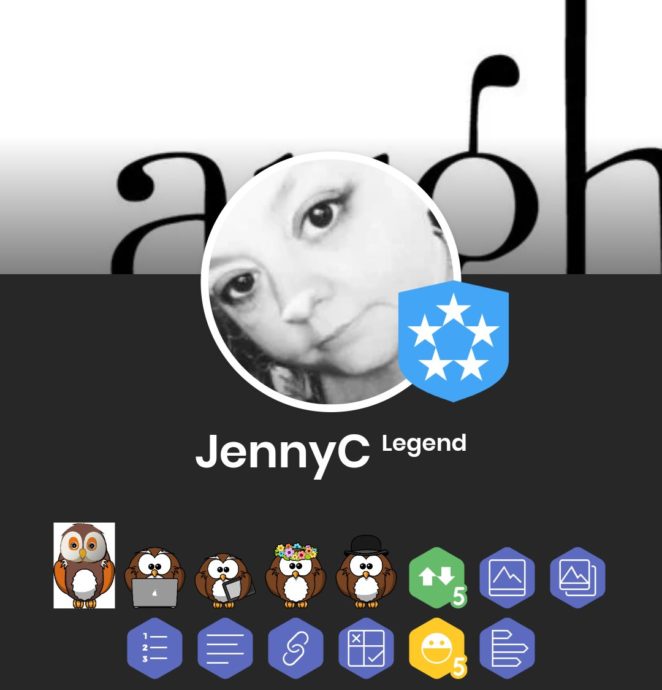 JennyC is also among the newest blogger to make it on this list. She currently earns 174, 431 viril points and counting, that earned her also a 5-star Legend rank.

Her posts are mostly on product reviews (such as gadgets, women's wear, toys, kitchenwares, etc). So if you would like to ask about the latest technology, just ask her coz she's techie enough and maybe savvy to help you out.

Cats are a great pet. was her first post published 4 months ago that currently earns her 7 up-votes, 17 shares, 299 views, and 2 comments.

It's your break JennyC, you deserve to be on the list too. Your knack on product reviews has brought you further from your extent. 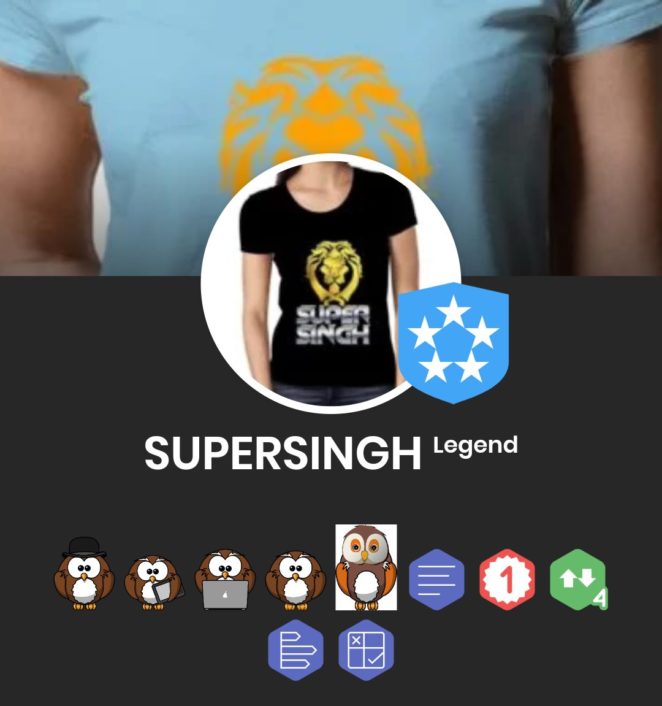 SUPERSINGH is also among the newcomers on this latest list. He currently earns 140, 857 viril points and counting, that earned him also a 5-star Legend rank.

His posts are mainly on sports, polls, site features, shopping tips, foods, vegetables, and some few health tips. So if sports is really your game, better make friends with SUPERSINGH, he'll really make your life fit and healthy.

Guru Nanak Dev Ji was his first post that is about the creator of Sikh religion, with the same name of its post title. It was posted 5 months ago, and is currently earning him 6 up-votes, 112 views, and 10 comments.

How time flies by so fast SUPERSINGH. Congrats for making it this far on the list! 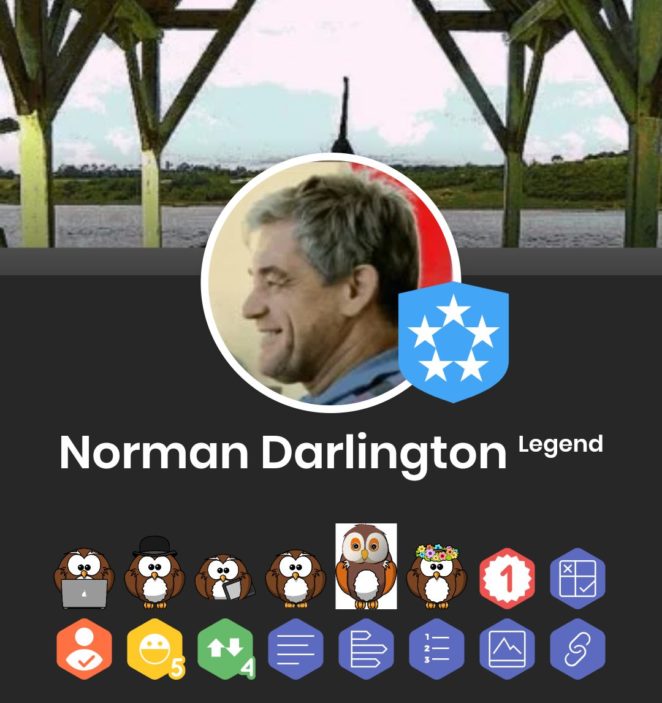 Norman Darlington is among the retainers in this list. He previously stayed too long at the top spot for more than half a year, but my friend is gentleman enough to give his way to Carol at peak position. He was previously at 2nd spot and 3rd spot on my 2nd update. He currently earns 140, 609 viril points and counting, that earned him also a 5-star Legend rank.

His posts are mostly on general knowledge quizzes in different series, especially in landmarks, countries, English words and grammar, and some variety of informative mind-boggling challenging quizzes. He also posts on some puzzles, garden plants, and latest events. If knowledge is what you are craving for and some fun facts too, just look for Norman, coz he will do some jumpstart on your brain cells.

Thanks for keeping up at the list Norman. You are one of Virily's most promising bloggers. You deserve the spot on the list. Just keep the spirit alive and passion ablaze! 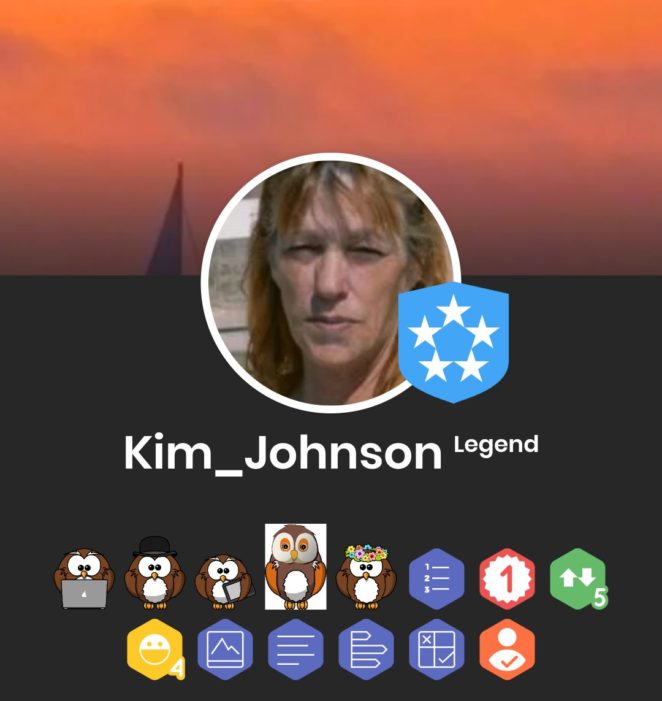 Kim_Johnson is also one of the retainers on the list. She was on the 4th, 7th, and 9th spot on the third, second, and first update respectively. She currently has 110, 853 viril points and counting, that earned her a 5-star Legend rank.

Her posts are mainly on travel blogs, nature and photography, and animal quizzes like cats and dogs. She also authored her own taglined series of jokes — Kim's Joke of the Day. So if you want some best medicines to treat you right, just hang on to Kim's posts coz she will definitely add up some humor to your days and relaxing posts about everyday's nature photoshots took by hers.

My first post here on Virily! was obviously her first post published 10 months ago that currently earns her 26 up-votes, 2 shares, 110 views, and 32 comments.

It's good to see that Kim is still as active the way she first started. You deserve a round of applause! 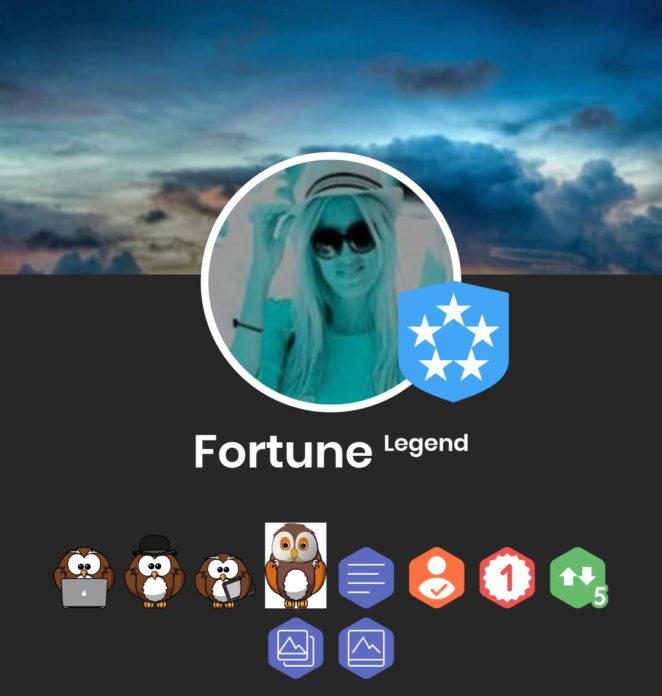 Fortune is also one of the retainers on this list. She was at 3rd spot previously and 8th spot on the 2nd update. Currently, she earns 108, 202 viril points and counting, earning her also a 5-star Legend rank.

Her posts are mainly on interior designs, country recommendations, tourism, and some life hacks and tips. She also features top ten places to travel on some amazing cities and countries from around the world that makes her posts unique among others. If you like globetrotting, just simply keep posted and follow Fortune coz she will definitely spell you out the words like "wonder"  and "wander ".

Labrador Retriever  was her first blog posted 10 months ago that currently earns her 19 up-votes, 1 share, 292 views, and 7 comments.

The name Fortune has brought her luck and good fortune for keeping up on the recent list. Travel blogs really brought Fortune on the list, and that's the flabbergasting fact. Keep up the good work Fortune! 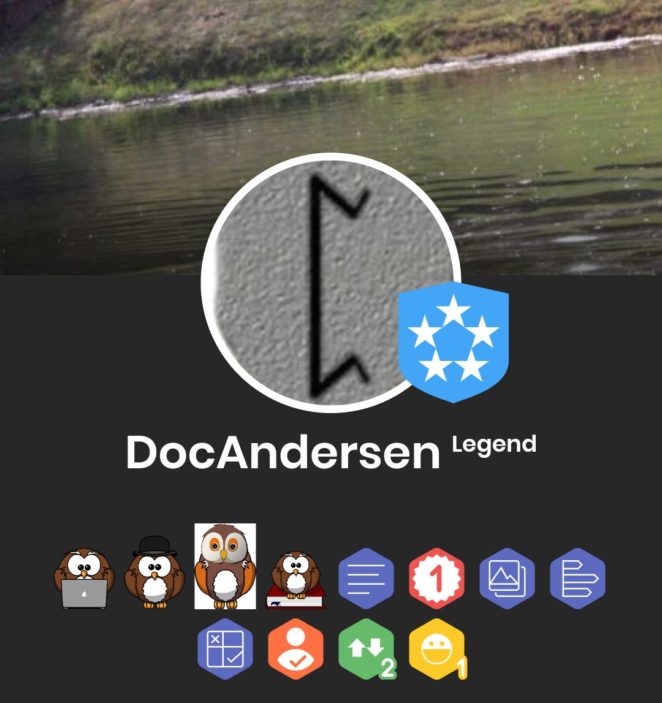 DocAndersen is also one of the retainers on the list. He was previously at top 7. He currently earns 98, 308 viril points and counting, earning him also a 5-star Legend rank.

His posts are mostly on travel, tourism, and some tech reviews. He is also famous for his tagline "wander projects", his daily journal of pictures from his nature and some travel treks. If you like some technology advancement, gadgets, and some travel tips, just read his posts and you will definitely gain useful knowledge from his articles.

Data Is Now The New Orange was his first post published 10 months ago. This post currently earns him 13 up-votes, 4 shares, 74 views, and 10 comments.

What's Up Doc? We really need your presence on the list as well as for your continuous and aspiring blogs at Virily. Your posts are healing to our senses, just like your name which has Doc in it. Good job Doc! 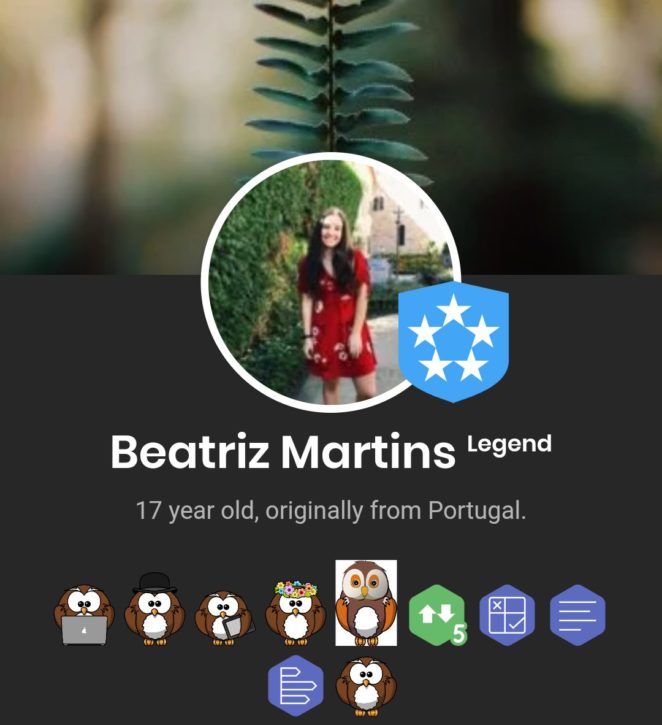 Beatriz Martins is among the newest bloggers to make it on the list. This 17-year old teen from Portugal (the youngest) as what her profile said has brought an example to her generation that blogging is indeed fun and money-earning. She has 92,349 viril points and counting s of today that earned her also a 5-star Legend rank just like others on the list.

Her posts are mainly on quizzes such as lyrics from songs, artists, celebrities, and some general knowledge. She also posts on flowers, foods, animals, and some few quizzes on Portuguese language.

Ways to fill your empty notebooks! was her first post published 5 months ago earning her 39 up-votes, 375 views, and 52 comments.

Congratulations for making it up on the list Beatriz! Your passion deserves a reward for a youth like you. You set a good example among other teens in your generation. You must be proud of it. Keep it up!