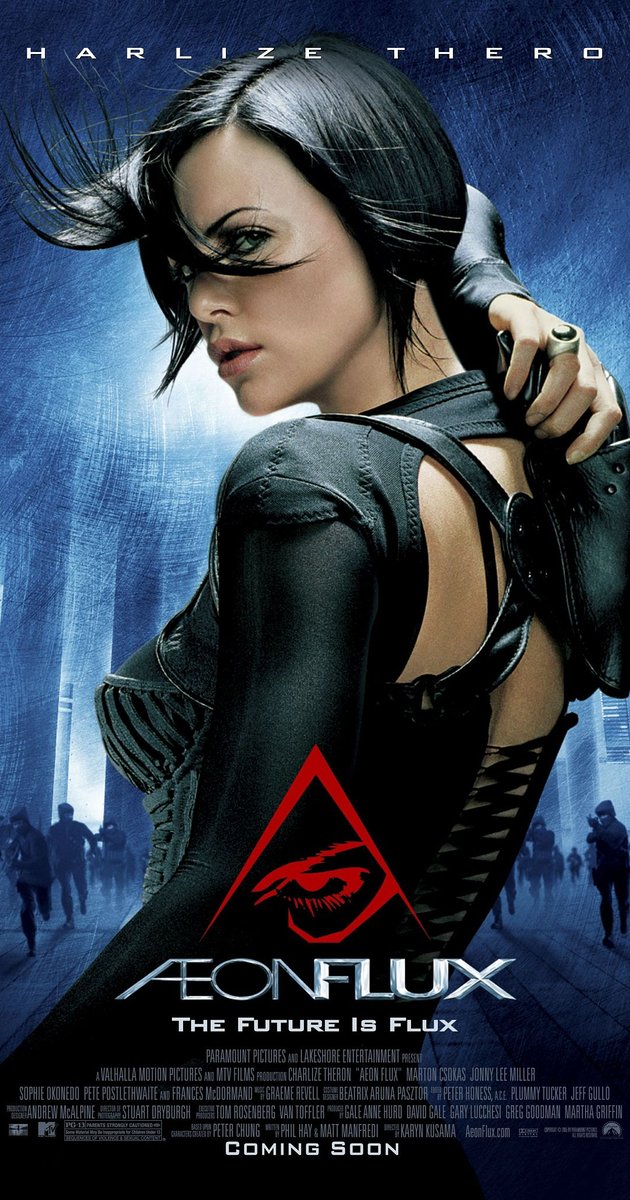 I don’t normally watch such movies, but I liked to watch something on the indie channel while eating my breakfast or drinking my morning coffee. And, this movie, Aeon Flux, came on after the movie Spectre, in which I watched the last hour.

This 2005 movie was directed by Karyn Kusama, as well as written by Phil Hay, Matt Manfredi, and Peter Chung.

The only familiar actors in this film are Charlize Theron and Francis McDormand. At first glance, I was attracted to the modern little city, surrounded by a huge cemented wall for protection. But as I continued to watch the film, it reminded me of 1984, Hunger Games, and other dystopian futuristic societies. It was dark and well controlled, but the residents were provided for and promised a good life if they don’t resist and keep their mouth shut. This high wall reminds me of the one in Zionist Israel, in which we know is controlled by Rothchild family, as well as the wall that Trump wants to build between USA and Mexico.

The cinematography was cool and fun because everything was very modern and futuristic, like a space-age city in 2024. I enjoyed the cinematography because the scenes were like traveling into another world far away. It almost looked like scenes from Dubai because of the cool building shapes.  Like any other futuristic dystopian movie, there was a cool monorail, which is really created to reduce driving cars and further control the public. But beyond and around this futuristic city with very high cemented walls is a huge jungle filled with animals because apparently, the animals have taken over. So, at first glance, this futuristic and circular-shaped city looks like a safe haven from others. But is it really?

The names in the movie were interesting, such as this city was controlled by the Goodchild family, which reminds me of what the Rothchild family.  One character, a Goodchild member, is Oren Goodchild, which is similar to the Israeli Oren who always promoted Zionist Israel. Another character, played by Frances McDormand, is the”Handler.” Charlize Theron plays the main character, Aeon Flux, who is an assassin fighting to save a repressed city from the Zionist government. But Aeon Flux is more modern than Hunger Games’ Katniss Everdeen because Aeon wears a sleek black outfit, like the Catwoman, with a black modern asymmetrical bob. Her weapons and tools are modern gadgets, such as a long modern microchip on the insides of her lower arm, and other modern gadgets she uses to fight off others. She is also able to change her left eye into a huge dark pupil, which is a symbol for Satanism, and it is similar to the David Bowie different eyes—one eyeball looks normal and the left eyeball looks overly dilated. The city is controlled by a Police State to keep the residents silent as they conform to the Goodchild society rules. There appears to be a lot of scientists, chemists, doctors, and gardeners in this film, which indicates they are doing all kinds of experiments to further alter genetics. For one thing, cloning is very common in this movie, and it appears that Aeon, as well as others like her, are a form of transhumanism. The military appears to be involved in this Police State to control and repress the residents. One character in the movie is a Keeper, in which the Hunger Games had Peacekeepers to control its resident impoverished slaves in FEMA camp districts.

It is also mentioned in the film that residents often mysteriously disappear or are mysteriously murdered for some reason, which indicates that dark forces or a dark group are always controlling situations and the public.

The music and film editing were good because it blended well with the futuristic scenes to create drama and suspense as Aeon enters various futuristic buildings with cool shapes and hidden modern rooms, in which some of these rooms appear to be underground.

I enjoyed watching this science fiction film, mostly because of the cinematography, special effects, and visual effects. I also noticed at the end of the film that this movie was originally in 3D if you had seen it in the theater, and, in my case, it would have been fun to watch in 3D since I was more interested in the cinematography and visual effects art purposes. (It actually gave me some drawing ideas for my graphic novel pages that I haven’t drawn yet).

Therefore, you get the idea about this film. For me, it was fun to watch visually because of the artistic effects and cinematography, but the story was basically about the New World Order agenda, a futuristic dystopian and totalitarian society, and a repressed and silenced public who are constantly being watched 24/7 as well as they are always under control via “created fear.” Such movie plot is getting old because there are many similar movies out already, but with different actors and different scenes to make it appear like a different movie. Such movies are used to push certain ideas and a twisted agenda on the public so that idiots will start accepting this New World Order agenda as a normal, safe, and a cool way of life. Such movies are also created to make moronic people think that they need some form of protection from “created” terrorists so that idiots will want to live in a futuristic prison, fully controlled by the Zionist government, who are actually the real terrorists behind all the fictional and created terror worldwide.

You can also watch this full movie on Youtube for free.