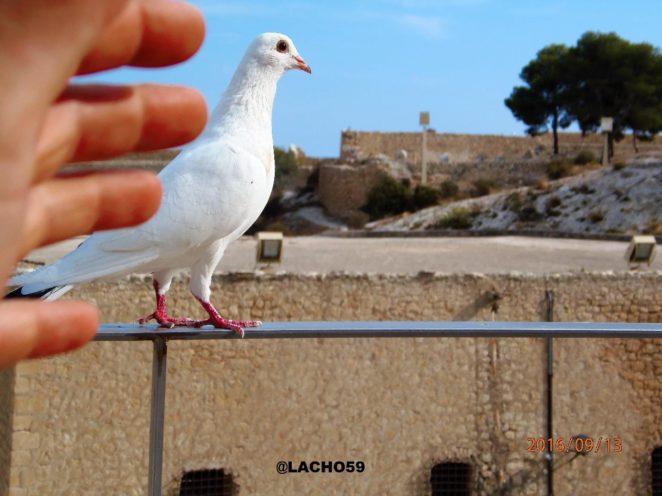 1. How old are the pigeons?

Pigeons have lived with humans for thousands of years. The first evidence of pigeons was discovered by archaeologists in Mesopotamia dating back to 3000 BC.

For the ancient peoples, the white pigeon is considered a miracle, for which reason he was very honored and even considered sacred.

Throughout history, the dove has performed many roles, ranging from its deification, to being a postman, a pet, a food for humans, and even a hero of war.

For the first time the pigeon is mentioned in the Old Testament, in the story of Noah. After the flood Noah sent a crow and a dove to see what was on the ground. The dove returns with an olive branch in the beak so Noah understands that the ground has already begun to dry and the flood has passed. From there, the dove is also a symbol of peace.

Later, already in the New Testament, the dove was mentioned at the baptism of Jesus Christ, where the bird descends upon him as the Holy Spirit.

3.Out stools – nasty or very valuable?

Although dung stools are a major problem for owners of many properties in the 21st century, in the 16th, 17th and 18th centuries they were a valuable resource in Europe. They have used them for the production of highly valued fertilizers with more powerful properties than manure. At that time even special pigeon houses were built to make it easier for them to collect their stools, and around the cottages there was a guard to keep the birds from bad guys.

In the 16th century England, pigeon stools were the only source of Selitra, a major ingredient of gunpowder. They were therefore considered extremely valuable.

4.The queen as a war hero

During the First and Second World Wars, the dove saved thousands of people by transmitting messages through the enemy lines. Then he played a major role as a postman. Pigeons have passed messages from soldiers to their families. They even collected intelligence data.

The largest dove communications network was established in Syria and Persia around the 5th century BC.

In the 12th century AD. The mail pigeon was the only means of communication in Baghdad, Syria, and Egypt.

During the Roman era pigeons were used to convey the results of sporting events during the Olympic Games.

The French and British governments honor the mail pigeon for their ability to transmit information during military action.

Unbelievable, but the fact – the last station of pigeons was closed in India in 2004 with the motto “Pigeons for Peace for Their Peaceful Life.”

During the First World War, the dove of Cher Ami (Dear Friend) saved the life of many French soldiers, passing a very important message at the height of the war. Then, while he was carrying the message in his leg, he was shot into it. Although he lost part of his leg, he managed to pass the message, flying 25 minutes through the poisonous gases as a result of the military action. So he was declared a dove-hero in France.

Another such pigeon is Joe, who saves the lives of thousands of people during the Second World War. Military actions were between Britain and Italy. Communicative means were a deficit, and the only way to quickly transmit valuable information was the dove Joe. He flew over 32 km in 20 minutes, and thanks to the message, military action stops. So he was declared a dove-hero.