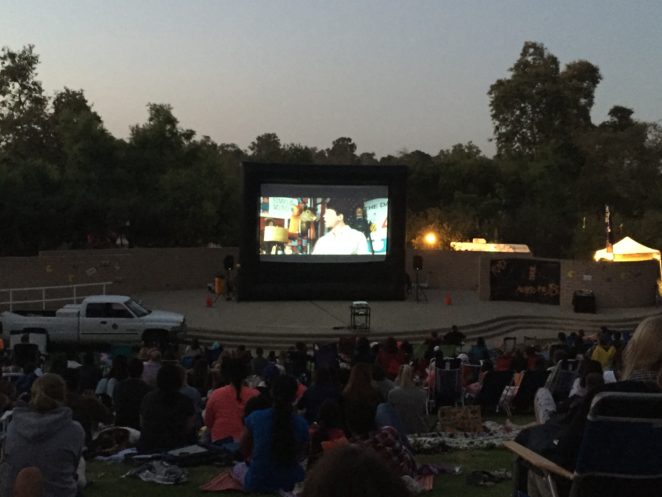 Today was a long day, and I had many errands to do, which includes going to the dentist to re-cement my crown over the root canal area. I guess my teeth are too small, in which the crown eventually loosens and falls off. But I feel the mouth guard has helped. I just hope it is permanent this time. I noticed sequence numbers twice today, once at 11:11 am and once and 10:10 pm. But after going to Woodbridge for a one-hour group walk, I returned home and walked across the street to a “Movie at the Park” event.

I took with me a bag of red grapes because I was thirsty, and I didn’t have time to make a drink. They were juicy and sweet, and I finished the whole bag before the movie even started playing. It was OK for a teen film, but I liked the message that life goes by fast, and if you don’t stop and look around, you might miss something. I walked home in the dark, but it was peaceful and quiet, except for the busy street where cars were occasionally zooming by. I had to be careful before jaywalking across the street to my townhouse community. I took some snapshots of the crowd of people with their picnic and pets, getting ready to watch the movie. There were also a couple of food trucks selling snacks.

The movie, Ferris Bueller’s Day Off was filmed in Chicago in 1986. It is a typical film about American teenagers, similar to Risky Business, but Tom Cruise was more popular than Matthew Broderick. It was directed by John Hughes, who also did other teen movies, such as Pretty in Pink and The Breakfast Club. But in this movie, Hughes wanted to showcase different areas and famous landmarks in Chicago, such as Sears Tower, Art Institute of Chicago, Wrigley Field, and Chicago Mercantile Exchange. Hughes wanted to emphasize Chicago’s famous and iconic places, similar to what many romantic comedies promote about NYC.

It was an OK teen comedy, but I am just not familiar with the celebrities in this film. My favorite John Hughes movie was The Breakfast Club, which I think is the classic teen movie.