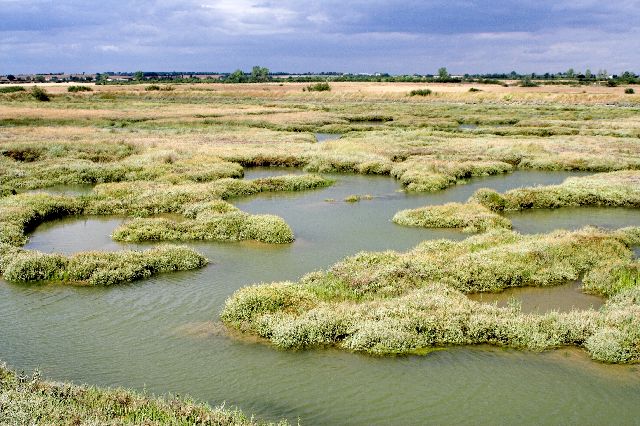 There are very few environments that do not support plant life of some kind, although some places are more challenging than others. Salt marshes, which are low-lying coastal areas in estuaries and harbors that are flooded at high tide but exposed at low tide, make special demands of any plant that chooses to colonize them, but there are several plant species that have become particularly successful at so doing because they can tolerate a high level of salt in the water at their roots. In return, they have become an important part of the ecology of these areas.

The plants that are found on salt marshes have adapted themselves to the particular conditions that are found there. As the tide comes in, the lowest lying parts of a salt marsh will be underwater for the longest time, whereas there will be areas higher up that will only be inundated when the tide is particularly high, such as happens during spring tides or if there is a storm surge. In between will be areas that experience moderate coverage.

Plants found on the margins of salt marshes include:

Sea lavender (Limonium vulgare) (photo above) is a semi-woody plant with succulent foliage that behaves like a cactus in that it can conserve water during dry periods. It hugs the ground and flowers from July to October.

Scurvy grass (Cochlearia officinalis) is not a grass but a flowering plant that is related to wild cabbage. Its leaves, which are succulent like those of sea lavender, are rich in vitamin C and were once eaten by sailors to ward off scurvy, hence the name.

Sea beet (Beta vulgaris maritima) is related to spinach but has large tough leaves that grow up to three feet high. It flowers from June to October.

Sea aster (Aster tripolium) This is an attractive plant when in flower (July to October) as it has daisy-like flowers that are lavender-colored with a yellow centre.

Plants that are regularly covered by water at high tide include:

Marsh samphire (Salicornia europaea) (photo above) This edible plant grows on the bare mud in tussocks of green stems that look like miniature Christmas trees. It can be seen from spring to autumn, when the stems turn reddish brown before dying down for the winter.

Plants that are covered by water most of the time include:

Eel grass (Zostera marina) (photo above) This is neither a grass nor a seaweed, but a flowering plant that pollinates in water. It spreads by rhizomes in the mud that send up ribbons of foliage in dense thickets. It is fed upon by wading birds such as Brent geese.

The importance of salt marsh plants

Salt marshes are subject to rapid change, in ecological terms, due to the vagaries of extreme weather events and the behaviour of the sea. These are open, exposed areas that can easily fall victim to storm surges or changes in sea level. One function of plants is to send down roots that provide a measure of structure to the underlying mud, thus stabilizing it.

It is therefore important to ensure that salt marshes are kept healthy and free from pollution, as they provide a vibrant and valuable environment for a wide range of wildlife as well as being beautiful and peaceful elements of the coastal scene.