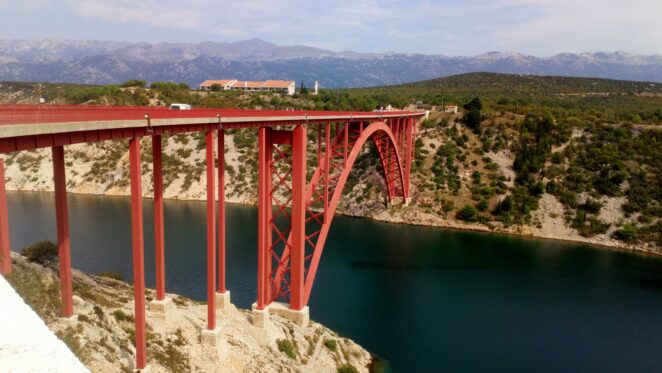 The theme of this week’s Ileana photo chain challenge is bridges.

The bridge connects the Dalmatia and the northern parts of Croatia, so the bridge has an important geographical significance.

There was an older Maslenica bridge, which was unfortunately destroyed during the Homeland War. It was renovated in 2005 (the “new old bridge”), but the government decided to build a new one to make transit more efficient.

The new Masleniški bridge is higher (92 m), so it is also more exposed to the bora. It records the highest wind speed in Croatia – a staggering 288 kilometers per hour! While this could represent a record-breaking, the new bridge is quite unpopular with drivers, as it is often closed due to the bora wind.

In this windy weather, they often drive over the old bridge, which opens to traffic when the new bridge closes, allowing all passengers to travel safely.