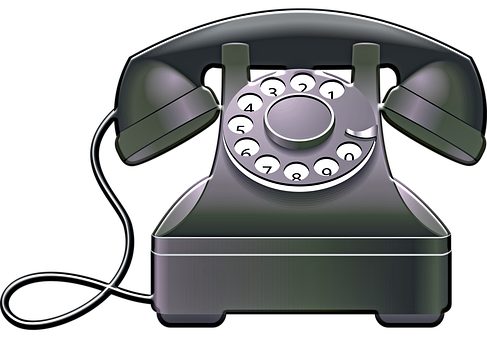 Growing up in my era, phones were not streamlined size that they are today.  They were heavy, black, Bakelite, rotary-dial phones which were leased from the phone company and had party lines unless you paid for the privilege of a private line.

First, if you picked up the phone and it was not in use, you could make a call. Your fingers did not fly across the touch-tone keys – instead your finger went around the dial for the first letter or number, then around again for each successive digit. The receiver was extremely heavy which encouraged you not to stay on the phone too long.

The telephone numbers were definitely different as well. I don’t remember the days of the 4-digit numbers; but in the early 60s our telephone number was EVergreen 2-6822.

Party lines were a whole other story. In the First and Second World Wars party lines were put in place to conserve the much-needed copper that it would require to set up more “loops” in the lines. To the best of my knowledge we only had one person on our party line; and she was a chatty one. Yes, you could pick up the phone and eavesdrop if you were so inclined. The operator could intervene for emergency calls at either end.

The following link connects to a video of two 17-year-old boys trying to use a rotary-dial telephone: Teens Using a Rotary Phone

At the 1962 World’s Fair the dual-tone multi-frequency push-button dialing was introduced under the trade name “Touch Tone”. By the 1980s the rotary dial phone and party lines were becoming a thing of the past.

Thank you for stopping by and reminiscing with me!