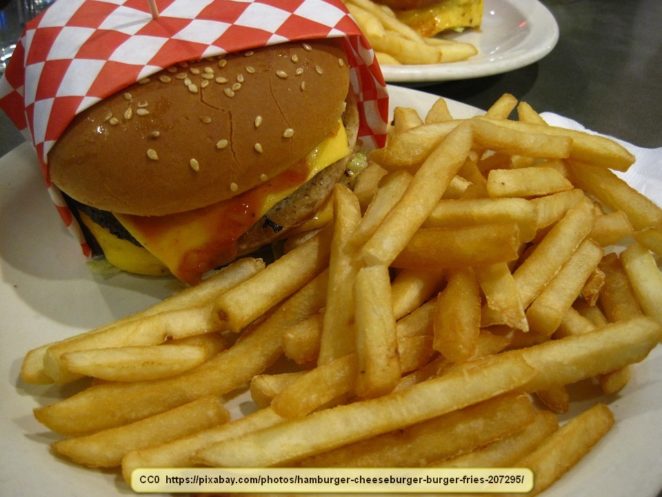 Have you ever really thought about the term, “Fast food”? It is often used to mean something served in certain restaurants, which are also called ‘fast-food restaurants’. This includes such places as McDonald’s, Wendy’s, Burger King, Sonic, Subway’s, Kentucky Fried Chicken, and Taco Bell. But is it truly fast food?

When I last lived in a town that had a fast-food restaurant, and it actually had several, those locations were all about 10-20 minutes away from home. There is usually a waiting line there, whether you use the drive-through or go inside, so add another 5 minutes. The food takes typically 5 minutes or longer to be served once it is ordered. This means that driving from home to a ‘fast-food’ place, ordering food, receiving it, and driving back home typically took 30-50 minutes, often more if the traffic was bad.

I seldom prepare a meal that takes longer than 30 minutes to make. For many of the exceptions, they are slow-cooked so when mealtime rolls around, the meal is done and it takes a minute or two to dish up. All of these meals are healthier, tastier, and cheaper than so-called fast food, yet none of them are thought of as fast food.

Calling any of these restaurants ‘fast-food’ is a misnomer, specifically designed to cater to the instant-gratification and lazy crowd. That doesn’t mean that everyone who eats at these places is lazy or wants instant-gratification. The term is simply meant to give that illusion.

The term, “fast food”, was first used in 1951 and it strictly refers to the amount of time between the order and the delivery of the food. In the second paragraph above, I mentioned that it can take as little as 5 minutes from the time a person orders to the time they actually receive the food. Naturally, they take shortcuts and sometimes even have the food already cooked and waiting for the order, but that is still the meaning of the term.

Fast food places gained popularity in the 1950s and they have gained wider acceptance since then, but the idea isn’t new. The Roman Empire and the ancient Chinese also had fast food. Remember that the food from fast food places is usually premade. This means that a person actually can make fast food by simply pre-cooking it and heating it when desired.

Just as a bit of trivia, too, the first fast-food restaurant in the world wasn’t American, it was British. In 1860, it opened and served fish and chips. Fish and chips are still quite popular in the UK.

Anyway, there is no doubt at all that fast-food is popular. In 2018, it is estimated that the fast-food industry, worldwide, was worth $570 billion. That doesn’t mean that the food is healthy, tasty, cheap, or even fast, but it does mean that people buy it.