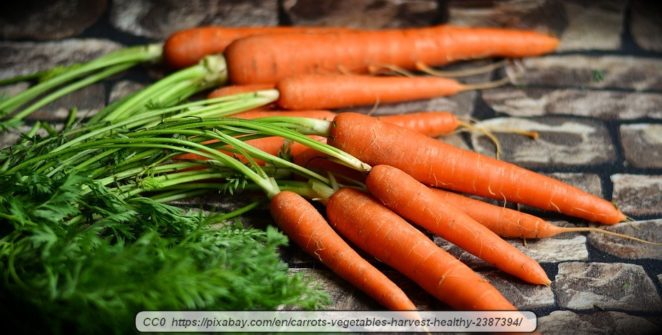 Carrots are among the most grown and eaten vegetables in the temperate regions of the world today. It is a wonderful vegetable that has a lot of health benefits, and there aren’t many home gardens that don’t have some carrots growing. Part of the reason is that they are easy to grow and part is that they taste good.

Where did carrots come from?

What people commonly grow in their garden and purchase in the store as carrots have a scientific name of Daucus carota. To understand the history of the vegetable and where it originated, it is helpful to remember the scientific name. The reason is that there is another plant that has the same scientific name. That plant is commonly called Queen Anne’s Lace.

Queen Anne’s Lace is also sometimes called Wild Carrot because that is exactly what it is. The carrots we commonly eat are simply the domesticated version of Queen Anne’s Lace.

In the United States, many people who have struggled at containing the invasive spread of Queen Anne’s Lace would be surprised to learn that this wide-spread weed isn’t native to North America. It originally came from Europe and temperate areas of Asia. Queen Anne’s Lace still grows in both areas and it has become naturalized in North America and other parts of the world.

It shouldn’t be surprising that over half of the carrots grown in the world today are grown in China since wild carrots are native to much of China. Wild carrots have a slender taproot, though, and the taste is often bitter, though the root is just as edible as those of garden carrots.

The plants were selectively bred, both to come up with a plant with more substantial tap roots and one that had sweeter roots that weren’t so bitter. This was accomplished and the first plants we’d recognize as carrots were grown originally in Afghanistan, probably as early as the 12th century. Today, it is hard to find a culture that doesn’t consume carrots.

Today, there are many cultivars of carrots; some big, some small, some orange, yellow, white, purple, black and red. Carrots are still being selectively bred to bring out different traits. Still, the carrots of today all came from selective breeding of wild carrots, or Queen Anne’s Lace, which originally came from Europe and Asia.

Wild carrots will continue to plague gardeners who try so hard to contain them. Yet many of those same gardeners treasure the garden carrots they grow, never realizing that they are the same species as the often-despised Queen Anne’s Lace. It shouldn’t make a lot of difference since Queen Anne’s Lace continues to be a valuable survival food, even if the roots are a bit slender and bitter.

Lots of people know that carrots are quite healthy to consume. A cup of carrots has only 52 calories. Carrots are high in dietary fiber and they have an extremely low glycemic index of 3, which makes them tremendously good for diabetics. They are low in sodium and don’t contain cholesterol.

For a long time, people have been told to eat a lot of carrots for their eyesight. This isn’t a myth. A cup of carrots contains an astounding 428% of the recommended daily allowance of vitamin A for adults on a 2,000 calorie diet. This vitamin is of prime importance when it comes to eyesight, especially night vision. Vitamin A is also quite important for healthy bones and skin, too.

This isn’t the only vitamin carrots contain, naturally. They are also high in vitamin K, C, and B6. They are a good source of Thiamin.

Additionally, carrots are high in potassium and manganese. They contain good amounts of other minerals and are high in the antioxidant, beta-carotene.

Limp carrots can be made crisp again by soaking them in ice water.

To cook carrots faster, cut them at an angle rather than right across the root. This exposes more surface area so the carrot can cook faster.

To make carrots sweeter, add some honey when you are cooking them. This is especially useful for carrots that have been stored for a while.

The fiber in cooked carrots is more easily used by the body that the fiber in raw carrots. Carrots shouldn’t be overcooked, though, because overcooking destroys most of the health benefits of the carrot.

It has been mentioned that China is the leading worldwide producer of carrots, with over half of the world’s production. Russia produces the second most and the US is third in production. Over half the carrots grown in the US are grown in California. The average American eats around 12 pounds of carrots each year. In fact, the only vegetable that is more popular to consume than carrots is potatoes.

Vitamin A deficiency is a significant problem in the world, especially in many poorer countries.  What is astonishing, though, is that a single crop of carrots grown on a square meter of ground can produce enough carotene and vitamin A that an adult needs for a year.

The name, “carrot”, actually comes from a Greek word. The Greek word is ‘karoton’. However, the antioxidant known as beta-carotene, which is contained in many other plants such as tomatoes, dark green vegetables, citrus fruits, and tropical fruits, is actually named for ‘carrots’. Besides being a powerful antioxidant, when beta-carotene is broken down in the body, it yields vitamin A.

As an added bit of trivia, the record for the heaviest carrot ever grown was harvested in 2014, according to the Carrot Museum. It weighed in at exactly 20 pounds (a little more than 9 kilos). It was grown by Peter Glazebrook in the UK. The record for the longest carrot ever grown goes to Joe Atherton, also of the UK. His carrot was grown in 2007 and measured a little over 19 feet (almost 6 meters) in length.