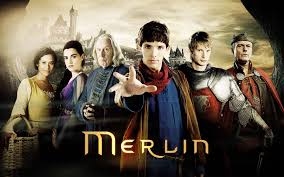 Merlin is a fantasy-adventure drama TV series from England that is based on Arthurian legends. It was broadcast on BBC One from September 20, 2008 to December 2012 with a total of 65 episodes from 5 seasons. This TV show is loosely based on King Arthur’s legends of the young wizard named Merlin and his relationship as his loyal servant to King Arthur, though different from traditional versions. The show was quite influenced by US drama series Smallville about the younger days of Clark Kent aka Superman.

Merlin is played by an award winning Irish actor Colin Morgan (Ariel of The Tempest / Duke of Blackwood of The Huntsman: Winter’s War / Frank Shea of Legend). He became Arthur’s servant and Gaius’ ward, who not secretly develops his magical gifts under the gaze of kings Uther and Arthur, both of whom despised the art, and death is the capital punishment upon knowing this. British actor Anthony Head (Rupert Giles of Buffy the Vampire Slayer / Chiron of Percy Jackson: Sea of Monsters / Benedict of Ghost Rider: Spirit of Vengeance / David Wheele of Dominion) played the role of King Arthur’s father — Uther Pendragon. He is the stubborn and hard-hearted king who has ruthlessly enforces the kingdom’s stric ban on sorcery. British actor Bradley James (Varga of Underworld: Blood Wars / Damien Thorn of Damien / Lowell Tracey of iZombie) played the role of once a prince and later king — King Arthur. Despite being charged with carrying out his father’s harsh edicts, he is still portrayed as a far more compassionate man, who defends the falsely accused before the king, and even secretly defies him from time to time.

Irish actress Katie McGrath (Zara of Jurassic World / Elsa of King Arthur: Legend of the Sword / Lena Luthor of Supegirl) played as Morgana Pendragon, Uther’s ward who is later revealed as his own daughter. Initially portrayed as a kind and empathetic young woman, who come to despise Uther not only for his prejudice against magic. She later became the show’s primary antagonist by the third series, relentlessly covering Arthur’s throne and coming to recognize Merlin as her strongest foe upon knowing he is Emrys. English actress Angel Coulby (Anna of Imagine Me and You / Katherine of Doctor Who) played as Guinevere, Morgana’s servant who later rises to become Queen of Camelot. 81-year old Scottish actor, theater director and broadcaster Richard Wilson (Dr. Constantine of Doctor Who / Mr. Capulet of Gnomeo and Juliet) played the role of Gaius, the court physician and Merlin’s mentor and guard. He was once a sorcerer himself, who has long since abandoned the practice but even so is willing to help foster Merlin’s talents, and comes to love as his own son. Deceased transatlantic award-winning British talent named John Hurt (Adam Sutler of V for Vendetta / Professor Broom of Hellboy II: The Golden’s Army / Professor Oxley of Indiana Jones and the Kingdom of Crystal Skull / Ollivander of Harry Potter and the Deathly Hallows) voiced as the Great Dragon named Kilgarrah. He is the last of his kind after Uther destroys all of his kin and imprisoned him in a vast underground cave, but later freed by Merlin and followed him when Merlin acquired his dragon lordship from his father.

Other recurring and guest cast includes English actor Nathaniel Parker (Dunstan Thorn of Stardust / Master Gracey of The Haunted Mansion / Martin Tanley of Beverly Hills Ninja / Caspian’s father of The Chronicles of Narnia) played as Agravaine de Bois, Arthur’s uncle who steps in after Uther dies, who reputedly became Arthur’s trusted adviser, but is soon identified as traitor and spy for Morgana. Chilean actor born in Venezuela, Santiago Cabrera (Isaac Mendez of Heroes / Aramis of The Musketeers / Santos of Transformers : The Last Knight) played the role of Sir Lancelot, one of Arthur’s Knights of The Round Table, who was beloved by Guinevere. English actress Emilia Fox (Dorota of The Pianist / Lady Victoria Wotton of Dorian Gray / Jane Seymour of Henry VIII) played as Morgause, a sister of Morgana, who awakens her dark sides as a black sorcerer, who also despises Uther. Welsh actor Alexander Vlahos (Monsieur Philippe d’ Orleans of Versailles / Malcolm of Macbeth) played the role of Mordred, one of Arthur’s youngest knights who secretly knows magic, and later became as Arthur’s traitor when his beloved one was executed upon learning she does magic. He later ran to Morgana, to aid against Arthur’s downfall. Irish actor Liam Cunningham (Solon of Clash of the Titans / Ser Davos Seaworth of Game of Thrones / Belgard of The Musketeers / Captain Zhukov of Doctor Who / Brick of Centurion / Colfur of Camelot / Maguire of The Mummy: Tomb of the Dragon Emperor) played the role of Ruadan, a druid sorcerer who join forces with Morgana. British actor Tom Hopper (Billy Bones of Black Sails / Dickon Tarly of Game of Thrones / Arminius of Barbarians Rising / Asbjorn of Northemn – A Viking Saga / Jeff of Doctor Who) played the role of one of Arthur’s loyal knights of Round Table — Sir Percival. Welsh actress Erin Richards (Barbara Kean of Gotham / Sharon of Graves / Krissi Dalton of The Quiet Ones) played as Eira, a spy of Morgana who earned trust of Gwaine and was later hanged to death by Guinevere. British young actor Asa Butterfield (Ender Wiggin of Ender’s Game / Hugo Cabret of Hugo / Jake of Miss Peregrine’s Home for Peculiar Children / Bruno of The boy in the Striped Pajamas / Young Ben of The Wolfman / Norman Green of Nanny McPhee Returns) played the role of young Mordred.

So if you are an avid fan of Arthurian legends, you need to watch this TV series, as it will really get you acquainted to most of the characters that you just have heard before. You will also get to know Arthur’s Knights of The Round Table, and how his Excalibur sword was made and stuck into a stone where he got it by Merlin’s wise counsel. The Avalon, the Lady of the Lake, and all other monsters and creatures in this legendary adventures of King Arthur and Merlin were featured in this spectacular series. This is one of greatest works from British television and I was fulfilled after done watching its last episode. Now I know how Arthur become the Once and Future King, and how Merlin become one of the strongest wizards of all time. With nice scenes shot at Wales, France, and some parts of England, that will truly lead you to a wondrous ideal place of Camelot. Two thumbs up!