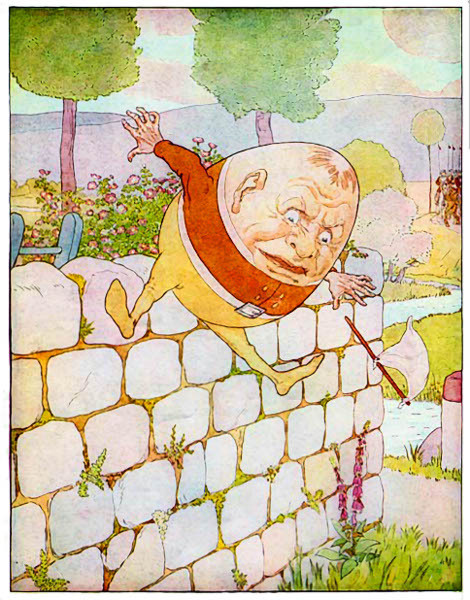 A public domain image of Humpty Dumpty caught in the act.

We all learned this nursery rhyme when we were children but most of us are completely unaware that the verse is loaded with significance. The rhyme’s author is unknown. A slightly different version than most of us learned, which we are aware of due to the writings of Lewis G. Carroll, appeared in Samuel Arnold’s Juvenile Amusements written in 1791:

An addition to a copy of the manuscript of Mother Goose’s Melody from 1803 changed the last line to: “Could not set Humpty Dumpty up again”.

Humpty Dumpty sate [sic] on a wall,Humpti Dumpti [sic] had a great fall;Threescore men and threescore more,Cannot place Humpty dumpty as he was before.

Humpty Dumpty lay in a beck.With all his sinews around his neck;Forty Doctors and forty wrightsCouldn’t put Humpty Dumpty to rights!

The melody it is often sung to first appeared in 1870 in National Nursery Rhymes and Nursery Songs written by William Elliott.

Although the rhyme nowhere refers to Humpty Dumpty as being an egg, the character is usually illustrated as an anthropomorphosized egg.

There are a couple of possibilities concerning the origin of Humpty Dumpty and they might all be true.

The first possibility comes from 17th century England where “humpty dumpty” referred to brandy boiled with ale. By the 18th century it was used to refer to a short, clumsy person. Presumably the potent drink made the person a bit clumsy.

In 1930 Ketherine Elwes Thomas suggested that Humpty Dumpty might be a reference to the Tudor King Richard III who was defeated at Bosworth Field in 1485. Contemporary histories and Shakespeare’s plays portray Richard as humpbacked, hence, humpty dumpty. The problem with that theory is that the term “humpbacked” didn’t come into use until the 18th century.

Another theory is that the name refers to the “tortoise” siege engine. The “tortoise” was an armored shell which was used unsuccessfully in a siege against the city walls of Gloucester in 1643 during the English Civil War. This suggestion was made by Professor David Daube in 1956.

Another theory posits that the rhyme was created by Royalist defenders (“all the king’s men”) at Colchester during the siege of 1648. At that time Colchester was a walled town with a castle and several churches. According to this account, published on the website of the Colchester Tourist Board, Humpty Dumpty was a colloquisl nsmr for a large cannon used to defend the town., A shot from a Parliamentary cannon damaged the wall beneath Humpty Dumpty causing the cannon to crash to the ground. The Royalists tried to put Humpty Dumpty on to another part of the wall, but it was too heavy. Hence, “All the King’s horses and all the King’s men couldn’t put Humpty together again”. If you have to pick just one, this seems to be the most widely accepted.