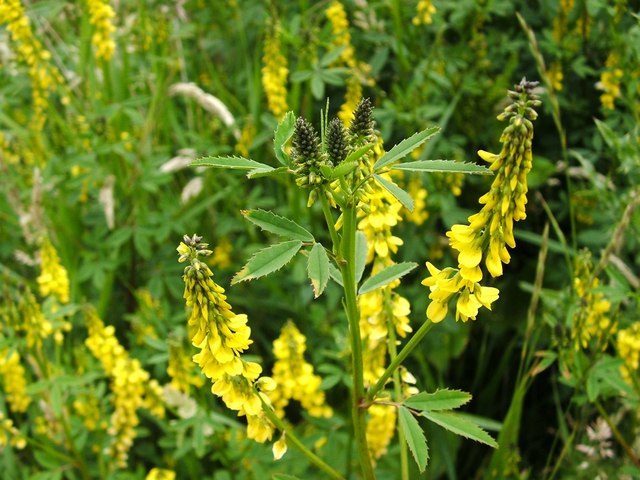 Tall melilot (Melilotus altissima) is a plant that grows wild in waste places such as roadsides and in woods. It is fairly common throughout Great Britain, although rarer in northern Scotland. It is not a native plant, having been introduced from the European Continent in the 16th century for use by herbalists.

Tall melilot deserves its label, as it grows up to 48 inches (120 centimetres) high. The branched stems carry stalked leaves (with three leaflets) and long slender flower spikes. The flowers, which appear from June to August, have deep yellow petals that hang down. As the plant’s name might suggest, melilot is a source of wild honey and it is attractive to bees and hoverflies. It needs to be visited by large insects because the weight of one landing on a flower causes the petals to be pressed downwards and the stiff stigma to touch the underside of the insect’s body where it will be able to be fertilised by pollen that has been carried from other flowers.

The tiny black seed-pod is egg-shaped and covered in downy hairs.

Tall melilot contains coumarin, an aromatic substance, in its leaves and stalks, and this causes the plant to smell pleasantly of new-mown hay when dried. As mentioned above, the plant was formerly favoured by herbalists, who used it to produce ointments and poultices for the reduction ofswellings, blisters and bruises. It was also used in the 19th century for the relief of tired eyes when the flowers were infused in camphorated spirit.

Tall melilot is therefore one of many plants the beneficial use of which is now generally ignored. There is often a good reason for not treating ailments with products gathered from the wild, but there are also cases where to do so would cause no harm and should perhaps be encouraged. Maybe tall melilot is one of the latter.