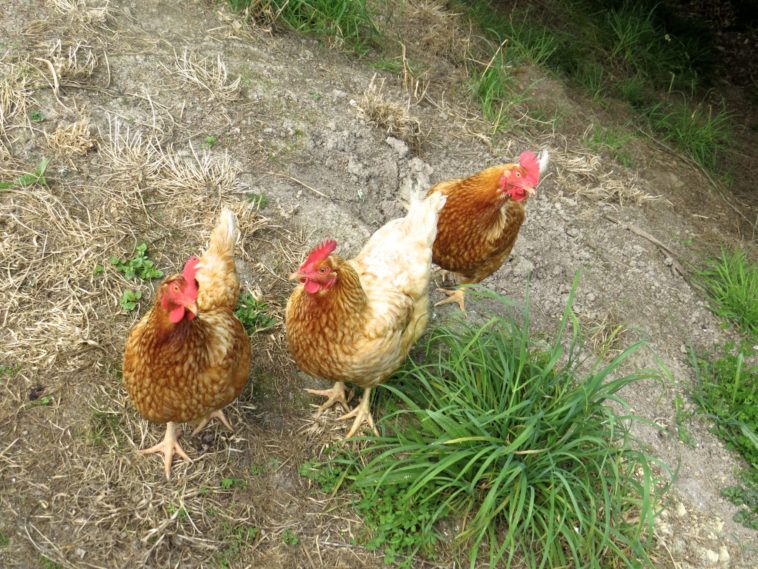 Introducing three beautiful Brown Shaver Hens from Te Kauwhata in the Waikato region. They belong to my sister Felicity and her husband John. There is no rooster but they can produce eggs, free range and they have acres of land to wander free. They are very friendly and talk to you when you cross a field. When you feed them they allow you to pat them and their feathers are soft.

Hens will lay eggs regardless of a male rooster present. Your laying hen’s body is naturally intended to produce an egg every 24 to 27 hours and it will form the egg regardless whether the egg is fertilized during it’s formation. It is no different than a woman during menstruation, except the very small egg of a human goes out with the blood lost during menstruation. It is nature.

Now, lately there is a lot of talk concerning the laying of eggs and cruelty to chickens.

Some places are extremely cruel to hens, as they are put inside cages where they can’t move and live inside all their lives. The hen is very unhappy and as a result many feel bad about eating commercial eggs.

In my opinion, they should ban hens being caged and by law the hen should be allowed to have it’s own place to lay eggs but be allowed out in a large field and pick around the grass and enjoy the sunshine.

My sister’s hens are allowed to enjoy their life and so the eggs have more colour and the hens are very happy to roam free. I am against cruelty to hens but I am for eggs from Happier hens, we call, “Free Range”.

What is the egg made of? The egg shell is almost entirely calcium carbonate (CaCO3) crystals.  It is a semipermeable membrane, which means that air and moisture can pass through it’s pores. The shell also has a thin outermost coating called the bloom or cuticle that helps keep out bacteria and dust.

Generally the hen will lay an egg a day but it will slow down in winter. When it gets older it will lay fewer eggs. When a hen begins laying eggs it’s called a “Pullet”.

Like many types of birds, yes chickens can fly. They can only fly short distances, but it is important that if they are free range that you should have good fencing for your fields, other wise they will lay eggs in an unknown location. A chicken can easily jump four feet, but I recomend that you use a six foot fence will ensure it stays in your field.

To care for your hens, allow them to go in and out of their chicken coop and have a place where predators can’t get them. You may have to lock them in if you live in a country where predators roam at night. In New Zealand we don’t have foxes or cougars and there aren’t any snakes either. However, we do have; cats, feral cats are the worst when people dump them on the road side and leave them to die a slow horrible death of starvation, dogs can get them too and you need to be aware of duck shooting season.

Have a pen to lock the hens away at Duck Shooting season. The Duck shooters often have their dogs. In NZ Duck shooters must have a licence, they must ask your permission to enter your land. Duck shooting is generally from March/April under August 27th. There are strict laws about Duck shooting. Unfortunately Ducks have to be culled. Smart Ducks usually go to private parks.

Unfortunately some Duck Shooters do it for fun and exclude native New Zealand birds. Generally some people don’t like it but they will do it anyway. Some people do it to get a meal. The Fish & Game NZ generally do an account of how many Ducks and Swans there are to see that places do not get over populated.

This is a controversial subject but in my opinion, the Duck Shooting needs stricter measures, in particular with people getting gun licences. We have had a few incidents of hunters not identifying their targets properly and they occasionally shoot their own friends by mistake. So, I believe that a person with a gun licence must have some type of proof that they are responsible people who are not fools with guns. Too many idiots get guns and should not be allowed to have one!

Now the problem with hens in Duck Shooting season is that the dogs will get them if the Duck shooters come near your property.

My sister unfortunately lost one of her precious hens because a dog killed it.

The Duck shooter offered to buy another, but hens will kill a new hen if they don’t know it. So she is now left with only two hens.