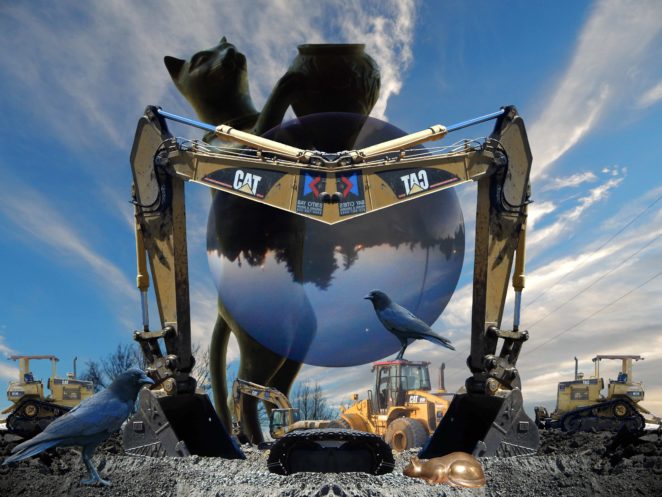 In conjunction with the “Color Crazy Challenge – Blue” week I have chosen part two of the Predatory Metal Cats Series. This challenge was started by Kim Johnson and details can be found here.

The predatory metal cats are seen mucking things up under a beautiful BLUE sky. There is a feel of alternate universes or dreamlike imagery with the hovering inverted orb world and the mirrored shovels. The ‘wrong way reading’ CAT logo could have easily been replaced to read correctly but was not.  The viewer is standing at the seam of the world and the backwards world – half in one world; and, half in another. The ever present crows or ravens are watching as the metal machines crawl upon the earth leaving a trail rubble in their wake.  This piece from the series also features the five dollar brass cat that was found in a junk store. This cat appears often in my collages. The series itself is one idea explored in different ways.

This series is a commentary on the extractive industries that are wreaking havoc on the living things of our planet.. They are a photomontages combining elements from my personal photographs (taken by me). Many of the machines involved are made by the Caterpillar corporation and have the logo that says ‘CAT’ on them. So, I decided to call them ‘predatory metal cats’. This is one of my most ‘flushed out’ series of images and they are the source of several offshoots. I am planning to slowly publish the whole series here so watch for updates.

This is the second installment in the series. I present Predatory Metal Cats 050117.

Part one of Predatory Metal Cats is here.