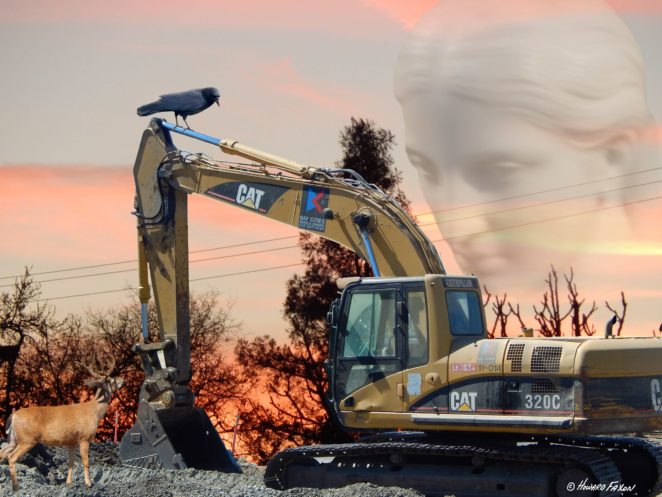 Predatory metal cats was an idea that struck me a couple of years ago. Around the time of “Earth Overshoot Day” I made a picture to comment loosely on the extractive industries that are wreaking havoc on the living things of our planet. The machines made by Caterpillar all have the logo that says ‘CAT’ on them. This is how I decided to dub them ‘predatory metal cats”.

I posted the first picture here a couple of years ago on ‘Earth Overshoot Day’. I keep referring to these images but have never shown them. Now is a good time to change that. This is one of my most ‘flushed out’ series of images and they are the source of several offshoots. So, I want to publish the series here on Virily over the next weeks and explain the process of making them a little.

For this introductory post I chose one of the later works which is a favorite of mine. It has a soft and warm feel with the exception of the hard and dirty CAT. And, while I am stuck with using only my pictures I that have taken to draw from, I feel this image was able to convey an idea by “speaking with a closed mouth” so to speak. I didn’t think a subtitle was needed to help it. I present “Predatory Metal Cats – 111416”.