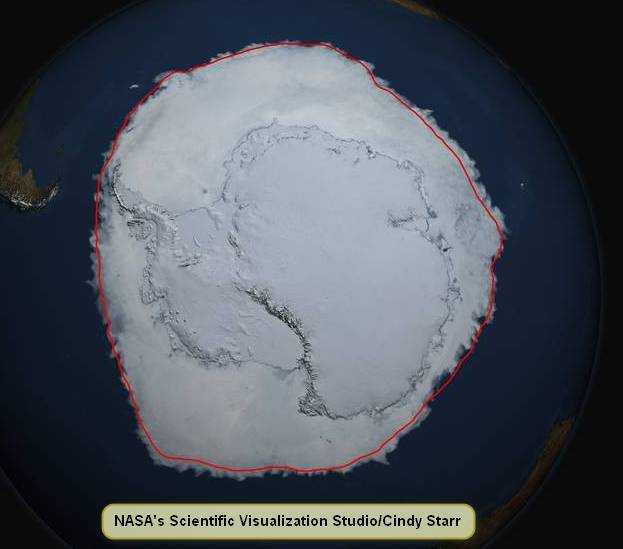 Arctic ice isn’t growing at such a rapid pace, though it does expand seasonally, as one would expect. People might wonder why there is such a disparity between Antarctic and Arctic ice. NASA explains it by saying “The new Antarctic sea ice record reflects the diversity and complexity of Earth’s environments.” However, this really isn’t an explanation. It is just a fancy way of saying that scientists honestly don’t know all of the variables when it comes to the earth’s climate.

And yet, NASA does have a partial answer, though they are reluctant to talk about it in detail. The explanation isn’t difficult to grasp, though. It is simply this: Nearly all of the ice in Antarctica is on top of land, which is surrounded by the ocean. In the arctic, almost all of the ice is on top of ocean water, surrounded by land. This makes an enormous difference.

On land, at sea level, ice freezes at 32° F or 0° C. However, ocean water has a lower freezing point. Ocean water freezes at 28° F or -2° C. The average temperature of all of the ocean water, in general, is about 38.3° F, well above the freezing point of seawater. It would stand to reason that ice that is above ocean water would be more apt to melt.

Further, the average temperature inland in Antarctica is -50° F/-45.6°C. Ice should build up in Antarctica, just as NASA has recorded. At around the time that NASA recorded record-breaking amounts of ice in Antarctica, they also registered the lowest natural temperatures ever recorded on Earth, in Antarctica; below -135° F/-92.7° C.

In case anyone wonders, as of the first week of December 2019, Arctic ice covered 3.60 million square miles, officially. Interestingly, the thickness of the Arctic ice has been growing since 2008 in Chukchi, Beaufort and East Siberian areas, which indicates greater snowfall amounts. That is part of the equation, too, since virtually all of Antarctica is technically a desert. The average precipitation in Antarctica is just over 2¼ inches per year.

The red line in the picture is the ‘normal’ extent of ice in Antarctica.