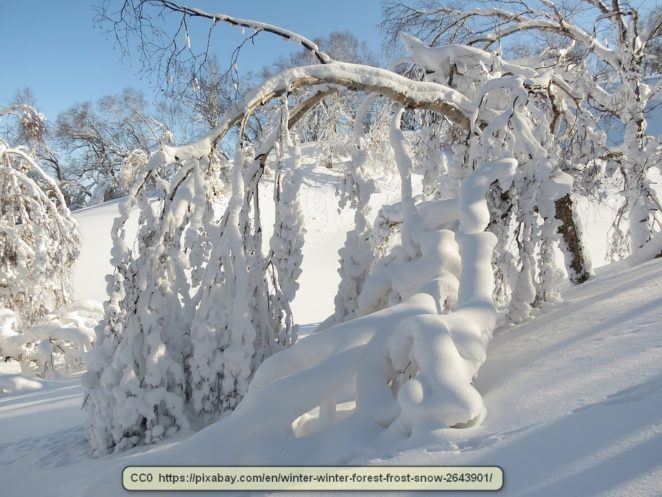 When winter strikes, people in temperate regions tend to complain about the weather or the snow. However, there are some astounding facts about both winter and snow that most people don’t know. If you don’t, please don’t feel bad. You have lots of company and can use this as an opportunity to learn.

1. Earth’s distance to the sun

It is all too easy to think that snowflakes don’t fall very fast. This is partly because of observation. It isn’t unusual to see snowflakes drifting down like feathers, buoyed up by the air. However, this is a deceptive optical illusion.

Fluffy snowflakes actually fall at a rate of about 5 feet every second. If the snow is in the form of pellet snow, it can fall faster.

Complicating it more, a blizzard is caused by a combination of wind and snow. If the wind is blowing at 30 miles per hour, the snow is being blown along at nearly that speed. This means that while snow may only be falling at about three and a half miles per hour (5 feet per second), the flakes can be moving laterally about ten times faster or more.

It is common to think of Hawaii as a tropical paradise, and it is in many ways. However, Hawaii records snow nearly every year. How is this possible?

The answer is simple. The mountain peaks of Hawaii tower far above sea level. For instance, the top of Mauna Kea is over 13,800 feet above sea level. At this altitude, wintertime temperatures are often well below the freezing point of water. The precipitation that falls usually does so as snow.

Truth is that snow can fall virtually anywhere in the world if the conditions are right. Snow has been recorded in the Sahara desert, in Baghdad, and even in Guatemala City, near the equator. In fact, the driest desert on earth, the Atacama desert, Chile, recorded nearly three feet of snow in 2011.

Just because a location is close to the equator or is situated in a desert doesn’t mean that it can’t snow there.

Some snow is “wet” and some snow is “dry”, but it all contains water. What is surprising is the amount of water it contains.

In wet snow, which is snow that has a high water content and is usually close to the melting point of water, the snowflakes are close together. In dry snow, also called powder snow, the flakes are usually smaller, but they normally aren’t as compact. In both cases, there is air trapped between the flakes of snow. What’s more, water expands as it freezes. Between the expansion and the airspace, snow doesn’t contain as much water as people often imagine.

On average, a foot of snow contains between 3/4 to 1 1/4 inches of water. This does represent a substantial amount of weight, however. A cubic foot of snow weighs roughly 62.5 pounds. A gallon of water weighs about 8.5 pounds. The fact that snow is frozen water doesn’t change the weight. Every year, many buildings collapse under the weight of snow.

6. Snowiest city in the world

If you were to guess at which city in the world receives the most snowfall, what city would you think of? People might think of Moscow, Oslo, or Anchorage, but none of these would top the list.

Although snowfall amounts can vary from year to year, the snowiest city in the world gets an average of a whopping 312 inches of snow every year, according to Accuweather. That dubious honor belongs to Aomori City on the island of Honshu, Japan. In fact, Accuweather lists four Japanese cities among the top 10 snowiest in the world.

Here are some astounding facts about the ice caps.

Only about 10 percent of the ice in the world forms in the Greenland ice cap. Most of the rest is locked up in the Antarctic ice cap, which measures over a mile deep in some places. That is solid ice, too.

Greenland still accounts for a substantial amount of ice. We also know that the ice in the northern hemisphere has been melting for the past 10,000 to 11,000 years. What fewer people know is that in 2011, satellite and on the ground observation confirmed that the Greenland ice cap started growing earlier than usual and was more extensive by the end of that winter than has ever been recorded.

Meanwhile, in Antarctica, though there has been a general yearly increase in ice coverage, the ice cap hasn’t grown nearly as fast. Why? Well, in part because most of Antarctica is a desert. That is meant in the true definition, meaning that it doesn’t get much precipitation. What little snow that falls is compacted and turns to glacial ice, but the growth is tiny because there isn’t much snow, to begin with.

As astonishing as it is, particularly in North America, more salt is used on snow and ice than on cooking. Every year, nearly 140 pounds of salt/person is applied to roadways in the US alone. That amounts to over 20 million tons of salt. That also doesn’t include the use on sidewalks or parking lots.

Icebergs are created by the calving, or breaking off, of glacial ice. The individual flakes of snow that fell to become glacial ice were made of snow, so the ice of an iceberg is made of fresh water, even though it is floating in the ocean.

For that matter, since salt water has a lower freezing point than fresh water, pack ice in the artic is also made from fresh water. You could actually melt it and drink it, and there is an excellent chance that it would be healthier for you than the bottled water you might buy in the store.

These are just a few of the astonishing facts about snow and winter. There are a lot more. Perhaps you can even think of some snow or winter facts that you find surprising? If so, I’d love to hear about them.