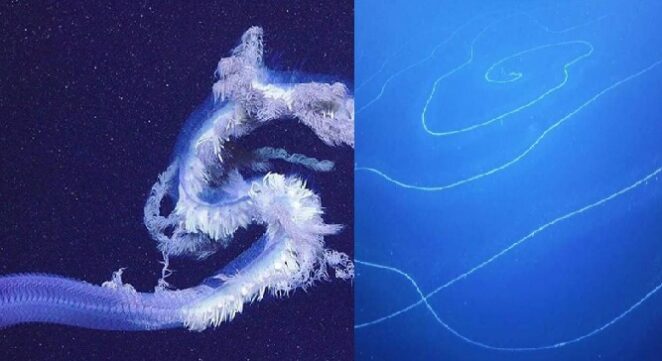 Scientists have discovered the world’s longest  floating animal in  ocean deep water. It is a kind of semi-transparent marine worm called Siphonophore. its body is made of small pieces and has been seen floating like a thread in a narrow ocean.

This research was conducted by experts at the Schmidt Ocean Institute in the United States. If this rope beast is straightened it will be more than 11 storeys tall. Experts around Australia have taken it by surprise, calling it the world’s longest marine animal, measuring 45 meters or 150 feet in length.

In fact, the smallest components together make up this strange animal, and at times it reaches 130 feet in length, but for the first time ever longer animals have been recorded with the camera.

Its thickness can be as large as that of a broom. The same team has discovered many strange creatures in the deep depths of the sea, thanks to a diving robot. They include cemeteries of mongoose rocks and new coral reefs. They also saw transparent sponges like glasses that were filmed on camera for the first time.

Siphonophore sea creature belong to hydrozoa, and so far more than 175 species have been discovered and they continue to grow without any sexual activity.