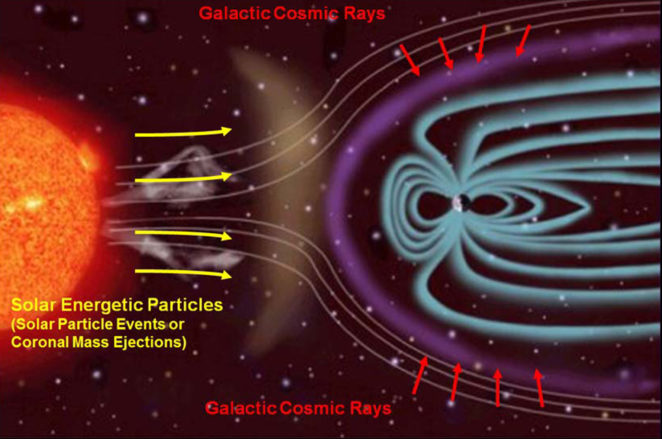 First, it should be explained that Earth’s magnetic field acts as a buffer, deflecting most of the harmful solar radiation and ionized particles. In the image produced by the Jet Propulsion Laboratories, there is a visual representation of how the magnetic field deflects the rays from the sun.

If the earth was hit with a strong solar mass ejection, the radiation, and energy from that radiation would be hundreds to over a thousand times stronger than what normally strikes the magnetic field. The magnetic field would be pushed much closer to the earth’s surface. The radiation would still most likely be kept from actually hitting the surface, but that isn’t the true danger.

The energy would easily be enough to blackout every satellite orbiting the earth. It would impact as a vast EMP or Electro-Magnetic Pulse. If you don’t think this would be a disaster, consider this. Without the satellites, there would be no Internet. Over 95% of the world’s financial transactions are tied to the internet. Most communications are also currently carried out using the satellites. Most of the money in the world isn’t actually currency, it is stored electronically and transmitted over the Internet. All of this would stop when the satellites shut down.

No communication would also mean that worldwide shipping would come to a halt. Nothing could be ordered and orders outside of the local area couldn’t be fulfilled. Supplies that people rely upon wouldn’t be delivered.

It gets worse. Such a powerful EMP could also knock out electrical grids, worldwide, as well as all electronic devices. Many of those devices would be so overwhelmed that the electronics would be fried and unusable. There would be no power or electronics and if electrical grids weren’t taken off-line before the mass ejection struck, they would have to be remanufactured from scratch.

We are now in the technological era and almost everything relies on electronics now. Just imagine if none of the electronics in your home worked anymore. Incidentally, that also includes cars, planes, ships, and trains. None of these can operate without electronics anymore. It could take weeks or months, possibly longer, to recover. Even electronics that weren’t destroyed still wouldn’t be usable until the solar ejection was passed.

None of this is supposition, either. Such a solar-driven outage occurred decades ago in southeast Canada, taking down the power grid there and in the northeast US. At the time, we were nowhere close to being as reliant on technology as we are today, so the recovery didn’t take all that long and the problem was mostly localized.

Imagine if it was worldwide, with everything hinging on technology as it does today. The worst part of all is that it isn’t a case of if we get hit by a solar mass ejection, but when we get hit. It is virtually certain to happen, we just don’t know when.