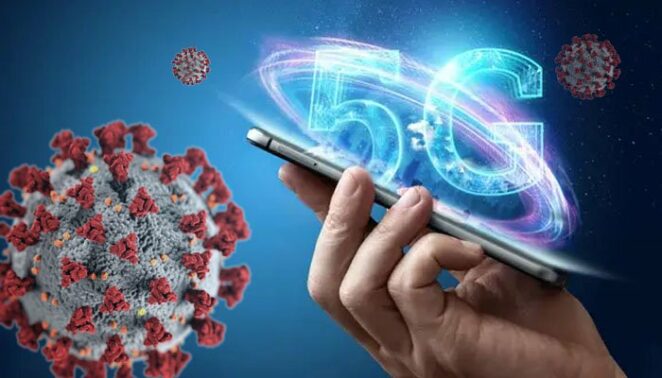 Now a days number of conspiracy theories on social media and the Internet, claiming that the Corona virus spreads through the mobile phone’s FiveG technology, but scientists have falsified and fabricated these ideas. Videos and articles containing these conspiracy theories have also been shared by several verified accounts with millions of followers on Facebook, YouTube, and Instagram.

But scientists says it is ‘completely nonsense’ and biologically impossible to merge Covid 19, the Corona virus and 5G. These conspiracy theories are also making the false claim that 5G technology uses mobile networks that rely on radio waves that cause the Corona virus to spread.

The greatest example of this is found in Birmingham and  Merseyside, those who believed the same theories also set fire to the towers of 5G technology. These theories initially began to circulate on Facebook in late January when the first Corona virus patient came out in the United States.

One theory claims that 5G technology weakens human immunity, which is why humans cannot fight against viruses while another theory suggests that the virus is spread through the use of 5G technology.

Dr Simon Clark, an associate professor at the University of Reading, says such things are absolutely ‘nonsense’.  that 5G technology affects immune system, because anything can affect the immune system. For example, we do not take it seriously for one day to take too much tiredness or good food but it does increase the chances of getting the virus.

Dr. Clark says that to say that very strong radio waves produce heat, which is harmful, but in reality 5G radio waves are not strong enough to heat humans, which can have a bad effect.

According to Adam Finn, a pediatrician at the University of Bristol, it is impossible to say that 5G technology can spread the virus or transmit it from one place to another. With the current outbreak we know that it spreads from one person to another, we know it’s true – even the virus taken from the affected person is still in the lab.

Viruses and electromagnetic waves that make up a mobile phone or Internet connection are just different things, like chalk and cheese are two separate things. These conspiracy theories are unacceptable because the virus is spreading even in countries where 5G technology is not yet available.