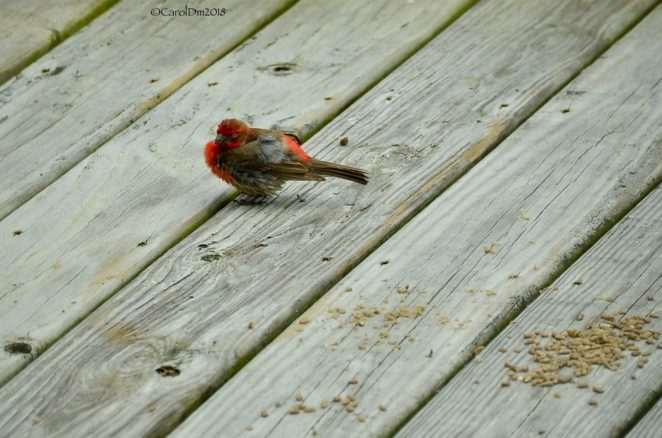 I have had several birds visit my deck and yard. House finches have been seen many times. I sprinkled some sunflower hearts out as the cardinals love them. With the bluebird house gone, I can put more seeds out, not worrying about what predators they may attract. However this little bird appeared the last few days and I am a bit puzzled. He looks like a male house finch with his bright red markings. But I am not completely sure. He looks different than the typical brown female finches I am used to seeing. He looks a little fuzzy, like the juvenile birds do. Perhaps just a new bird at my deck this year. I do know the house finch is one of the most common birds in North America. And that is probably what he is.

In researching the house finch I found this cool fact out… New York pet shop owners, who had been selling the finches illegally, released their birds in 1940 to escape prosecution; the finches survived, and began to colonize the New York suburbs. By 50 years later they had advanced halfway across the continent, meeting their western kin on the Great Plains. And now you know the rest of the story.