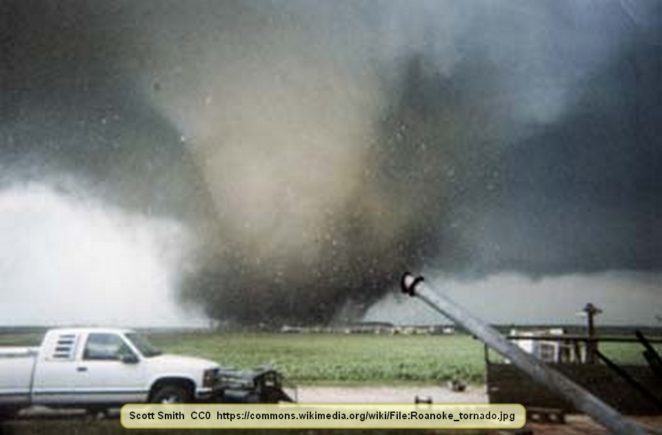 In recent discussions, we’ve talked about the jet stream and how the wind speed in the jet can be up to 250 mph. It was mentioned that this is nearly 100 mph faster than the winds of a category 5 hurricane. Another way to understand this airspeed is to compare it to the wind speed of a tornado and the enormous power a tornado contains.

Many people have never seen or experienced a tornado, though they can happen nearly anywhere. Some areas of the world are prone to tornadoes, however. That includes a large area of the US from the plains states to the southeast.

Tornadoes are more intense than hurricanes and typhoons and they are smaller, but the wind speed is greater. They are more localized. A strong hurricane can be over 300 miles in diameter. A strong tornado seldom covers over a mile and though it does wander, it typically doesn’t last for long.

Tornado categories range from F0 to F5. An F1 tornado can peel off a roof and push homes off their foundations. Moving vehicles are often pushed off the road. Yet the airspeed doesn’t exceed 112 mph (180 kph).

An F4 tornado, which has wind speeds about the same as the jet stream, causes almost total destruction. Mobile homes are demolished and shredded. Big trees are snapped or uprooted. If it strikes a forest, the entire forest can be flattened, leaving nothing but dirt and debris.

Trains are blown over, cars are pickup up completely off the road and are flung around as if they weigh nothing. Houses are often either blown apart or picked up and tossed around. There are images of F4 tornadoes lifting a fully loaded semi-truck off the road and throwing it hundreds of yards. Steel railroad rails have been twisted like cooked spaghetti noodles.

Tornadoes with a wind speed of 250 mph (almost 400 kph) have been known to drive grass stalks so hard that the grass has completely penetrated 1/4 inch steel signposts.

In the aftermath of a tornado this strong, virtually nothing is left standing where the tornado actually passed. Outside of that path, there is heavy damage.

And yet, tornadoes can also do remarkable things. In one documented instance, an infant was lifted out of its crib while the house it was in was being totally demolished. The infant was then carried a half-mile and gently deposited, unharmed.

The point is that a 250 mph wind can be devastating and can obliterate nearly anything in its path. The amount of power contained in a wind of that speed is nearly unbelievable.