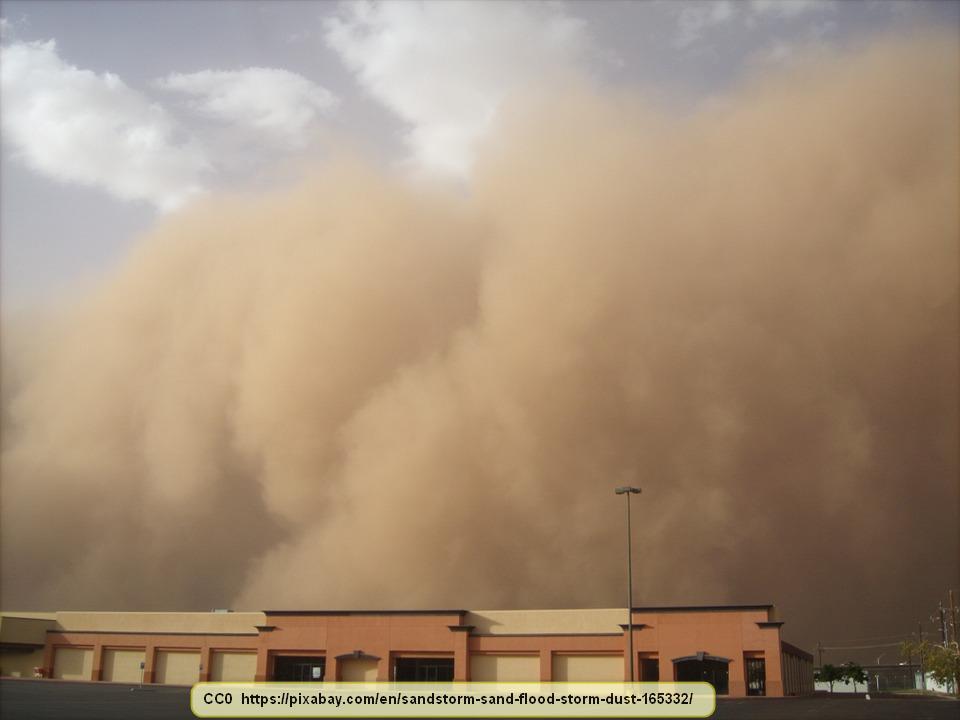 When people talk about storms, they often talk about hurricanes, typhoons, tornadoes, thunderstorms, rainstorms, and snowstorms. Few people talk about dust storms or sandstorms. In a way, that is understandable since if a person doesn’t live in a place where they occur, they may not know much about them.

In many places, dust storms and sandstorms are common, occurring almost every year. Many people know that haboobs, very intense thunderstorm generated dust storms, often happen in Arabia and the middle east. Some of these can be enormous.

However, did you know that an average of one to three dust storms occurs in Phoenix, Arizona every year? Africa, Australia, and New Zealand have all been impacted by dust storms.

Dust storms can force large amounts of dust high into the atmosphere, to altitudes of 10,000 feet, allowing the dust to travel considerable distances before it finally settles. Mysterious ‘red snowfalls’ in the northeast US have been explained when it has been noted that severe dust storms happened over the Sahara. The red pigmentation of the snow was actually from the red dust from the Sahara that the snow formed around.

In fact, the famous red soil of Bermuda didn’t originate in Bermuda. All of it was blown across the Atlantic Ocean from Africa.

Dust storms carry more than just dust, too. During the major dust storm that hit the US in 1935 and called the Dust Bowl, Kansas had a measles epidemic that was severe. Infant mortality skyrocketed and strep throat became common. These have been linked to the dust storm.

There is a difference between a sandstorm and a dust storm, though. As a rule, the larger the particles, the lower to the ground they move and the shorter the distance that they travel. Sand is much larger than dust, so in a typical sandstorm, the sand rarely moves more than four feet above the surface. That means that an average adult standing up will have their heads above most of a sandstorm.

However, sand, blown by strong winds, is tremendously abrasive. This makes it dangerous to exposed skin and other surfaces. The winds in a sandstorm may reach 100 miles an hour, which is enough to blast the paint off of a vehicle or the skin off of a person.

Since dust is finer, the biggest danger is in trying to breathe during the dust storm without a mask. The lungs can become filled with the dust-filled air and this is life-threatening.

People often don’t think about dust storms and sandstorms unless they live in areas where these storms are frequent. However, they occur yearly and can impact lands that are far away from the storms. Neither duststorms nor sandstorms are pleasant to be in, for sure.