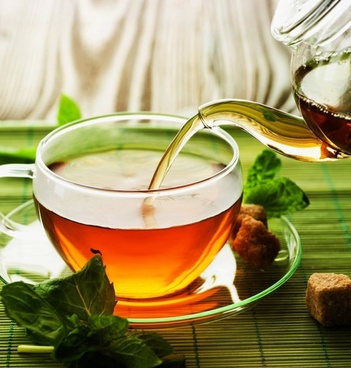 “There are few hours in life more agreeable than the hour dedicated to the ceremony known as afternoon tea.”

This quotation above, by the American Anglophile author Henry James,  is one of my favourite ones since I concur wholeheartedly with it. I am a traditional British tea-drinker, and I often consider a cup of tea to be one of the simple but wholesome pleasures in life. I saw a list in a magazine once of the Top Ten tea-drinking nations of the world, and top of the list was China, followed by the UK and Ireland in joint second place! (Yes, they like their tea too, over that small stretch of water known as the Irish Sea. I am half-Irish, as my mother comes from Dublin, so I get the tea-loving gene from both parents, clearly.)

Apparently tea originally came from China. The legend goes that one of the ancient Chinese emperors was sitting in his garden, drinking a cup of hot water, and some leaves from a tea plant growing nearby blew into his cup, and infused in the water. When the emperor tasted it and realised what a refreshing drink it was, he started having that as a drink each day and started the tradition of tea-drinking. I don’t know if that is true, but the tea plant originates in the Far East anyway, and was brought back to Europe by the explorers and traders. It’s hard to believe now that we didn’t have it here until around the 17th or 18th century! What on earth were people drinking then, e.g. first thing in the morning to get them going? I believe they had weak beer or mulled wine, but I don’t think either of those drinks are  enlivening or health-promoting in the way that tea is.

Yes, tea can be very healthy – it is full of anti-oxidants, which is very encouraging (especially  green tea, which is the leaves of the plant picked when still very young. The normal everyday tea we drink is black tea). But it also contains tannin, which is not all that good for you, and caffeine (although not as much as coffee). I probably drink too much tea (maybe 7 cups a day), and always have, since the age of about 3 (!).

But as I say, I am worried I drink too much of it, so I am trying to cut down. I have substituted green tea for black, and also other caffeine-free fruit and herbal infusions. A particular favourite is peppermint tea, which is very refreshing and good for the digestion. Whenever I travel anywhere I always take my little portable travelling kettle with me, so that I can brew up when I get to my destination.

I just consider drinking tea, especially with someone else, to be one of the cornerstones of civilisation. So if you are in my neck of the woods, do call in – the kettle’s always on!