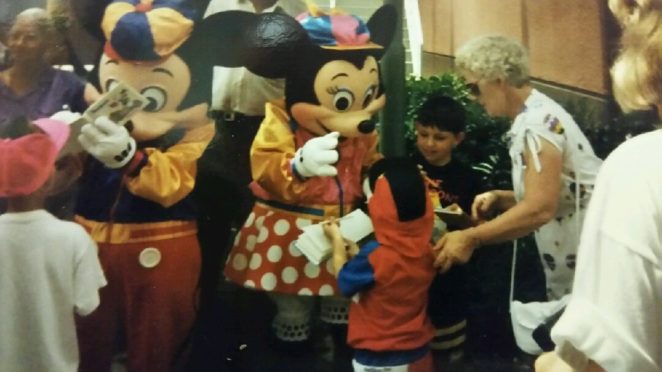 Youngor and I had been dating for nearly 10 months. The winter had not gone well, we had moved into an apartment together in January and a few weeks later she asked me to move out I moved into an apartment in my friend Jamal’s house, and expected to break up with Youngor. Within days she was showing up at my new place saying she missed me terribly and wanted to stay together. I didn’t feel enough trust to move back with her but we continued to see each other.

We flew TWA to Tampa & rented a Nissan Sentra for the week. We found the drive on Route 4 to Orlando fast and pleasant. Youngor loved the Magic Kingdom and we had a lot of fun….a couple in their 30s enjoying a place built for kids of all ages…Space Mountain, Pirates of The Carribean & It’s A Small World are the kind of attractions that make for a great vacation. Seeing Mickey, Minnie, and Goofy on a daily basis was definitely more fun than work. We discovered a Popeyes Chicken on the Outskirts of Orlando & with the exception of our night at La Colombia in Ibor City we had fried chicken every night. I wasn’t too impressed with Busch Gardens…the animals looked bored.

That week Spike Lee’s film Jungle Fever premiered. Youngor didn’t want to see it. On an afternoon that she was tired I drove up the street and went to see it, cognizant that a few people viewed our relationship  as being like that. I was slightly annoyed by that but  after 10 turbulent months and two break ups with her I wasn’t sure what we were anymore. I bought a six pack of Miller Lite, decided to not think so much & just enjoy the trip.