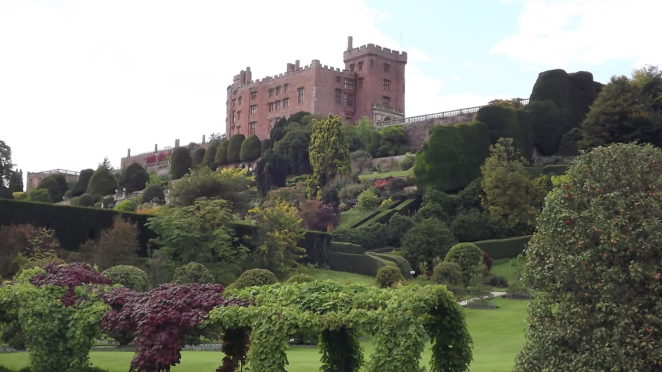 A visit to Powis Castle near Welshpool, east Wales, would not be complete without spending some time in the castle gardens. Apart from the gardens themselves, there are splendid views to be had of the surrounding countryside.

Powis Castle is set on a rocky prominence above the valley in which Welshpool sits, which means that the slope below the castle would be far too steep to plant a garden unless the land was terraced, and that is precisely what has been done. Four broad terraces lead down from the castle to the valley floor, where the gardens continue.

The terracing was started in the early 17th century, but the real work was done in the 1680s by the architect William Winde, who was also a military engineer who knew how to blast the solid rock away to create level surfaces.

The Herbert family, who owned Powis Castle, were supporters of the Catholic King James II, so when the latter was deposed and exiled in 1688 the Herberts went too. They were greatly impressed by what they saw of the gardens of French aristocrats and royalty, so, on their return in 1703, they set about creating a garden that incorporated features that they had seen in France and on their travels around continental Europe.

The gardens seen today owe much to the efforts of a more recent family member, namely Violet Lane-Fox (1865-1929), the wife of the 4th Earl of Powis. She left the castle and its grounds to the nation on his death in 1952. The countess sought to restore the gardens to their former splendour after many years of neglect, just as her husband did for the castle.

The four terraces contain a profusion of flowering and foliage plants backed by stone and brick walls and framed by low box hedges. Classical statues of nymphs and swains add a continental touch.

The massive yew hedges on the upper terraces and particularly at the northern end are notable features of the Powis Castle gardens. These hedges were originally trimmed into intricate shapes but are now “cloud pruned” into bulky shapes that are no less impressive. A photo on display in the garden shows how the hedges were pruned in former times, with gardeners climbing up 40-foot ladders and standing on top on the hedges armed with shears, but in these more health-and-safety-conscious times the job is done from a mechanical cherry-picker!

Below the terraces is a mixture of garden types, including a formal garden in the 18th century style, a croquet lawn, and the Grand Lawn that was originally a water garden. One area has been allowed to run wild (although it is full of daffodils in the spring) in order to encourage wildlife. There is a large area of woodland with paths running through it, and a small lake that is also designed as a wildlife haven.

It would be very easy to spend a long time in the garden, but the visitor needs to remember that the gate is locked at 5.30pm (earlier out of the summer months) and it takes longer to walk up four terraces to the exit than down!