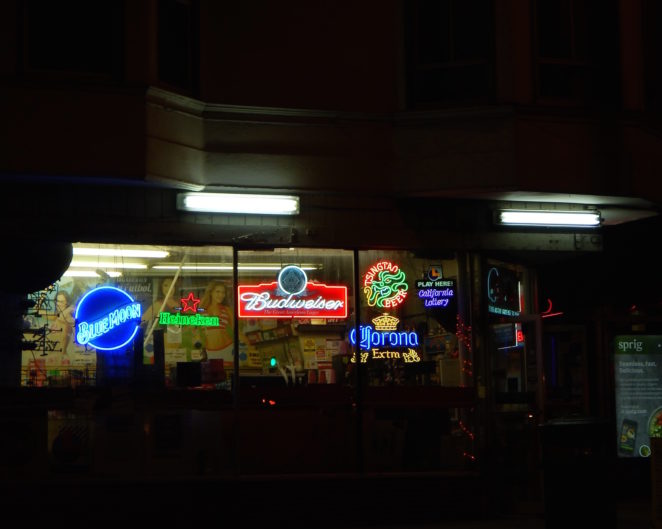 I have always enjoyed urban nocturnal photography. I used to do it when there was film in my camera. I used a tripod and a shutter release cable. There was no immediate feedback and the mistakes only became visible later when the film was developed. So it took planning and I kept a notebook of details for each exposure so that I could adjust them for the next role of film I burned. And burning film was burning money. Now the results are instantaneous and I seldom bother with a tripod. I do have various ways I brace the camera but if one picture is bad I just do it again and again until I get a good one.

I am doing a continuous series of small liquor stores at night. It has been going for time and will continue probably for years. I love these little stores because they are the only things open late. The signage, the neons, the lighting, and the bars on the windows make them good subjects. They sell cigarettes, liquor, and lotto tickets primarily so I titled this series “Selling Sins – Liquor Stores At Night”.

I’m using relatively low exposures because I love the inky blackness and the neon flares up too much at more normal shutter speeds. Some of the best ones are in areas where leisurely hanging around with a camera at night might be taking a bit of a chance. So I work quickly and pay real attention to what is around me. It makes it a little exciting.

And some of them are the quaintest nostalgia that some little town can offer. They all have titles which I didn’t include but this last one I call “Coldest Beer In Town”. That sign has been there a long time and I have also a close up of that sign in my signs collection.

There are tons of these lonely little markets selling sins in the darkness. They are not always relaxing or comfortable to walk into but they have the cigarettes, the gambling, and the liquor you want. … And where else can you go this late to get them?