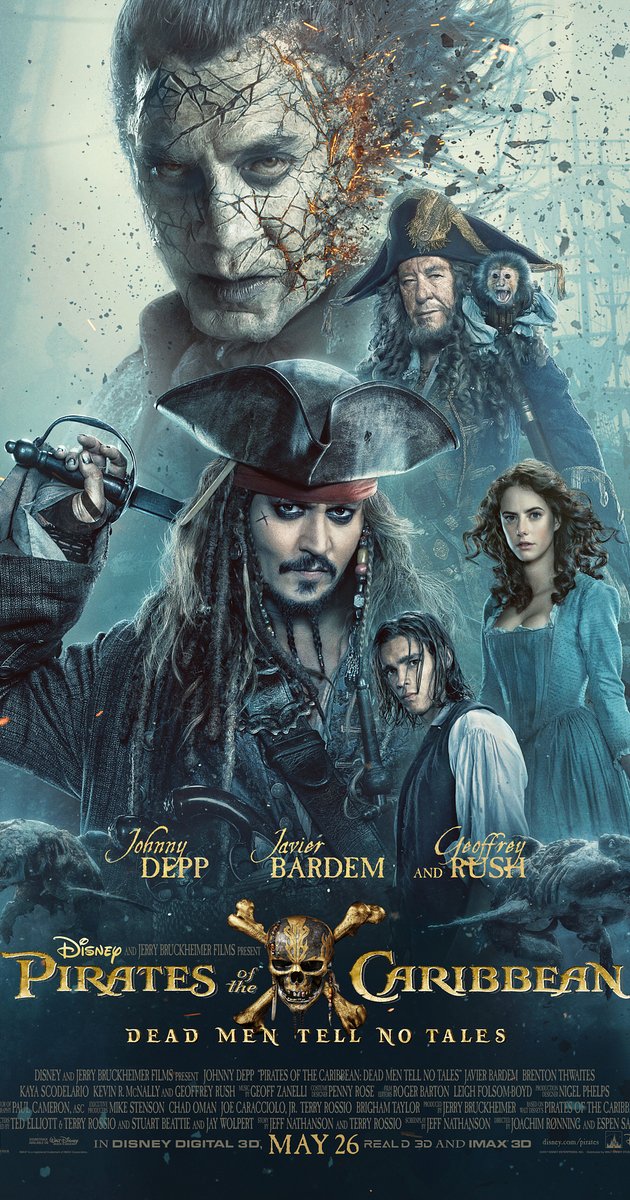 Warning: Some few spoilers ahead!!!

This film had $230 million for its production budget, yet gained a worldwide box-office grossing income of $793.7 million, making it the the eighth highest earning film of 2017, yet the second-lowest grossing of the series.

The movie is about two years following the post-credits scene of Pirates of the Caribbean: At World’s End, where 12-year old Henry Turner boards the Flying Dutchman to inform his father, Will Turner, that the mythical Trident of Poseidon is able to break his curse and free from his ship, and out of his intent, he seek Jack Sparrow’s help to find that the mystical trident.

The movie is cast by promising actors like Johnny Depp (Edward of Edward Scissorhands / Mad Hatter of Alice in Wonderland / Grindelwald of Fantastic Beasts and Where to Find Them / Tonto of The Lone Ranger / Ichabod Crane of Sleppy Hollow / Willy Wonka of Charlie and the Chocolate Factory) as Jack Sparrow, an eccentric but noble pirate captain of the Black Pearl; Will Turner, a blacksmith-turned-pirate who was transformed into the captain of The Flying Dutchman is played by an English born in India actor Orlando Bloom (Legolas of The Lord of the Rings and The Hobbit / Paris of Troy / Blackburn of Black Hawk Down / Duke of Buckingham of The Three Musketeers); Australian Academy-award winning actor Geoffrey Rush (Philip Henslowe of Shakespeare In Love / Leon Trotsky of Frida / Nigel of Finding Nemo / Ezylryb of Legend of the Gaurdians / Tomar-Re of The Green Lantern / Narrator of The Minions / Ra of Gods of Egypt) played the role of Captain Hector Barbossa, a one-legged pirate captain of the ship Queen Anne’s Revenge, also a former captain of the Black Pearl, and Captain Jack’s former rival-turned-ally; Another Oscar-winning Spanish actor Javier Bardem (Silva of Skyfall / Pablo Escobar of Loving Pablo / Blue Robot of Automata / Ramon Sampedro of The Sea Inside) played the role of an antagonistic character named Captain Armando Salazar, a powerful and maniacal undead pirate bounty hunter of the Spanish Navy who was trapped in The Devil’s Triangle.

New casts lead roles also includes award-winning young Australian actor Brenton Thwaites (Bek of Gods of Egypt / Tim Russel of Oculus / Prince Philip of Maleficent / Dean McMullen of Blue Lagoon: The Awakening) as Henry Turner, the son of Will Turner and Elizabeth Swann, who tries to reconnect with his father by saving him from his curse. Half-English half-Brazilian young actress named kaya Scodelario (Teresa of The Maze Runner film series / Peshet of Clash of the Titans / Older Cathy of Wuthering Heights / Tasha of Shank) played ther ole of Carina Smyth, a strong altruistic astronomer who helped Henry Turner and Jack Sparrow find the Trident of Poseidon. She was later unveiled as the secret daughter of Barbossa. Award-winning Australian actor David Wenham ( Dilios of 300 / Faramir of The Lord of the Rings film series / Harold Meachum of Iron Fist / Digger of Legend of the Guardians / Neil Fletcher of Australia / Carl of Van Helsing) played the role of Lieutenant John Scarfield, the second antagonist of the film and a British Royal Navy officer, who commands the HMS Essex. Award-winning Iranian actress Golshifteh Farahani (Aisha of Body of Lies / Laura of Paterson / Conchita of Finding Altamira) played the role of Shansa, a sea-witch and an ally of Captain Barbossa. English actress Keira Knightley (Jan Hall of Everest / Anna of Anna Karenina / Tinkerbell of Neverland / Guinevere of King Arthur) reprised her role as Elizabeth Swann, Henry Turner’s mother and Will Turner’s wife.

The post-credit scene of the Dead Men shows Will Turner, Elizabeth Swann, and Davy Jones, implying that Will and Elizabeth will be main characters again and Davy Jones would be the main antagonist in a sixth film. In September 2017, producer Jerry Bruckheimer indicated that another Pirates sequel is still possible if Dead Men Tell No Tales does well in its home release.

This movie based on my points-of-view is considered impressively done by the production. Aside from the splitting half of the ocean, which I watched before from an old Biblical movie called The Ten Commandments, and undead sharks, it really made me believe that highly computerized graphics are really advanced now when it comes to its digitality. It’s just like watching a TV series Black Sails on big screens and live-action movie of one of my favorite anime One Piece. This movie really made us to stop for awhile and take us centuries back where infamous pirates used to rampantly circumnavigate the world. This movie is flabbergastingly made for sailors and seamen. It’s really a must to watch. With 129 running minutes, this movie has lots of fun and thrills to share with. Another round of applause for Johnny Depp’s rallying role. Hope he could get this time an Oscar award. Good thing Disney produced this film.  Not another two-thumbs up movie I’ve watched this year!!!