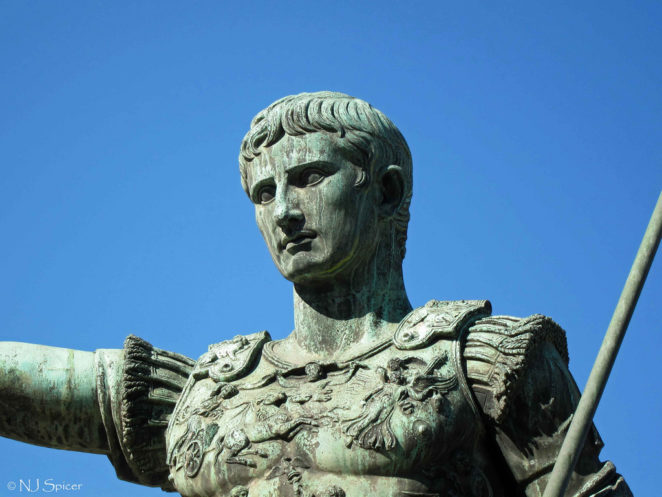 Although Julius Caesar acted in many ways like a monarch, the change from Roman Republic to Roman Empire dates from the accession to the role of head of state of Gaius Octavius (later Gaius Julius Caesar, but generally known as Octavian), with the title Caesar Augustus. This took place in 27 BC, but the process of turning Octavian into Augustus had been a long and painful one.

The rise of Octavian

Octavian was born on 23rd September 63 BC. His mother was a niece of Julius Caesar, but Caesar’s will adopted him as son and heir. However, the power in the land at the time of Caesar’s death by assassination in 44 BC was his partner as consul, Marcus Antoninus, known more generally as Mark Antony.

Mark Antony was about twenty years older than Octavian and came from a much more distinguished family. Under the Republic, the highest power was exercised by two consuls who were elected from the Senate to serve one-year terms of office. With Caesar dead, Mark Antony became the effective leader of Rome but did not continue to rule in the dictatorial way that Caesar had done.

Instead a triumvirate was formed, the members being Mark Antony, Octavian and Marcus Aemilius Lepidus, a former deputy of Julius Caesar. However, this was, in effect, a dictatorship by three men rather than one.

The triumvirate faced a challenge from two of the assassins of Julius Caesar, Brutus and Cassius, who were defeated at the two battles of Philippi in 42 BC. However, this victory strengthened Mark Anthony far more than it did Octavian. Mark Anthony established a power base in the east leaving Octavian to deal with risings in the west.

Having dismissed Lepidus from the triumvirate without consulting Anthony, Octavian was now the power in the west and he and Anthony were rivals for ultimate power. Antony’s personal behaviour shocked many Romans with his self-indulgence, most notably in his notorious relationship with the Egyptian Queen Cleopatra. Octavian traded on these stories of Antony’s licentiousness and set himself up as the more wholesome alternative, while at the same time ruling the west with some degree of compassion and common sense.

In 32 BC, when the triumvirate was in any case due to expire, Octavian engineered an excuse to declare war on Mark Antony. Octavian showed considerable skill as a general and was able to outmanoeuvre Anthony, scoring a decisive victory at the naval Battle of Actium in September 31 BC. Anthony fled and, a year later, committed suicide together with Cleopatra when Octavian’s army entered Alexandria.

(The Battle of Actium, by Laureys a Castro)

Octavian was now the undisputed ruler of Rome. During the following years one source of authority after another was handed to him by the Senate, thus creating the position of Emperor that his successors would hold for more than 400 years. In January 27 BC the Senate conferred on him the title of Augustus, which is the name by which he is generally known as Emperor.

However, Augustus gained power gradually and subtly, and was able to perform the remarkable trick of appearing to be restoring the old republic while at the same time ensuring that it could never return.

Augustus established his position by making some wise decisions that were aimed at getting people to accept the new status quo rather than be impelled to fight against it. Although he was a dictator in all but name, he did not act like one and rejected the title when it was offered to him (in 23 BC). For one thing, he saw himself primarily as Rome’s “first citizen” and he refused to accept any form of divine status such as had been accorded to Julius Caesar.

Another important element of his rule was that he made good use of deputies who took some of the burden of government off his shoulders. In particular he gave certain powers to two old friends of his, Maecenas and Agrippa, who had very different personalities and actually disliked each other, but whose presence at the top of the government made it clear that there was room in Augustus’s regime for talented people to make a real contribution. Maecenas did much to encourage the arts and Agrippa was a brilliant military commander.

Augustus the reformer and consolidator

Augustus’s position was not completely secure. In 22 BC a conspiracy of senators aimed to assassinate him and, although the attempt was bungled, it led Augustus to give serious thought to who should succeed him. He had no male children of his own and originally planned that Agrippa should be his heir. However, he also looked to the next generation as providing a possible successor and promoted the interests of the two sons of his third wife, Lucia, namely Tiberius and Drusus.

Augustus was careful not to take risky military gambles. He therefore began his rule in 27 BC by securing the status of Spain within the Empire, and later took action to ensure peaceful relations with Parthia (modern day Iraq and Syria). He knew that direct Roman rule in Palestine would lead to constant trouble and so installed a puppet king, Herod the Great, to rule on his behalf.

Augustus took active steps to reform the morals of Rome by encouraging the institution of marriage and punishing sexual offences. Adultery was made a crime and upper class men whose wives produced three or more children were given political preference. Augustus also encouraged religion by restoring the cults of the gods and building new altars and temples.

To reward Romans for behaving themselves, there were plenty of lavish spectacles; new entertainment venues were built and old ones improved. Augustus’s building programme was extensive, including Rome’s first public library and a portico for the display of works of art. Augustus boasted that he had found a city of brick and transformed it into one of marble.

Another major reform was that of the army, such that a proper career structure was introduced with a guaranteed retirement package for soldiers who had served at least 20 years. Augustus knew that a loyal army was essential for the future stability of the Empire.

However, the later years of Augustus’s rule were marred by the greatest disaster ever to befall the Roman military, which was the loss of three whole legions (the 17th, 18th and 19th) in the Teutoburg Forest of northwest Germany. In 9 AD the commander Quinctilius Varus was lured into a trap set by a supposedly loyal German chieftain and the legions were wiped out to a man. This disaster determined Augustus to set the river Rhine as one of the limits of the Empire, others being the rivers Danube and Euphrates.

Augustus died on 19th August 14 AD, at the age of 51. The month had already (in 8 BC) been renamed in his honour (it was previously Sextilis as the sixth month of the old, ten-month calendar). Tiberius was ready to step into his shoes as Rome’s second Emperor.