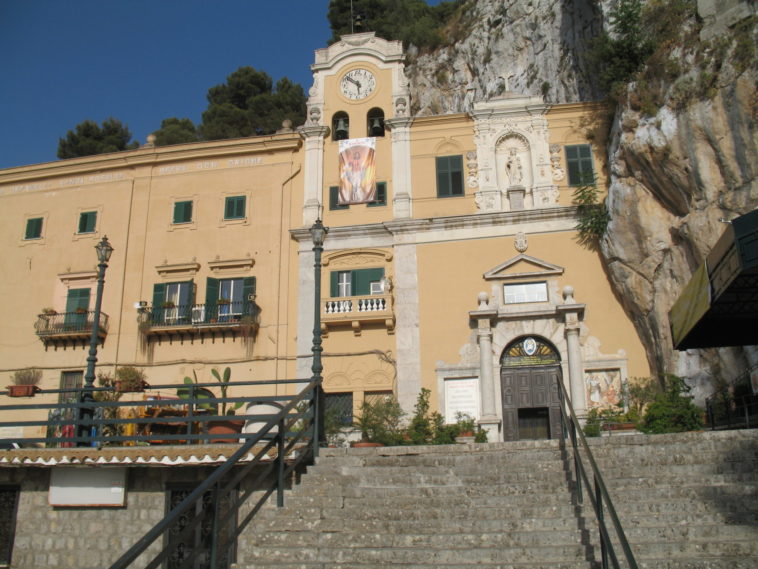 Driving up a windy, twisty road up mount Pellegro takes you to the place where Santa Rosalia’s sanctuary.  Graffiti covers almost everything, monuments, walls, and anything that does not move. I think they are gang symbols or maybe just children with nothing better to do than destroy national symbols.

This was once some form of structure that housed military or bandits guarding the roadway into Mondello. It is very old, but there was nothing about it, and it could be newer.  It is difficult to guess the age of an abandoned building in this shape. Cleaning the graffiti off of these structures causes more damage than anything else.

The view going up the mountain is breathtaking and beautiful. This is Palermo spread out around the bottom of the mountain.  It seems as though every square foot, or meter is utilized in some way to save space.

The Santa Rosalia Sanctuary built into the mountain side. It is a grand structure with many steps leading into the sanctuary. The vendors are placed at the bottom of these stairs following along the road that leads you to the chapel.

Hanging on the wall was a tree of former Popes of Italy and Sicily. The name Cardina came up several times leaving me to wonder if that was a shorter version of Carinale. It is rather difficult to read the names in this photo.

I am not Catholic, but I really think this is where the Holy water is kept at the entrance where you perform the ceremonies requisite of entering a Holy temple.  A lovely piece of art and sculpture adorns the entrance-way into the chapel area.

I do not know what this says, but it located next to the Holy water Angel. It looked interesting and possibly tells of the history of Saint Rosalia in more details.

The offerings that the pilgrims bring in hopes their ailments will be healed and their prayers will be answered. Canes, clothing and a wedding dress are left as cries for help along the doorway into the sacred sanctuary. It is touching that there are so many people who have the faith strong enough to come and worship and pray for spiritual and physical healing.

Santa Rosalia was a nun who tired of the people around her not living the Holy duties sacred and cherished her time alone. She withdrew from society to live on the top of Mount Pellegro where she lived inside of a cave. Many years later, her town became worried about her and went to see about her and carry food and water.  They found her remains encased in stalagmite and took her body to be buried in Holy grounds.  A plague had broken out during this time, and as her bones passed through the city the plague was healed. It was thought that her bones cured the plague. Every year there is a festival celebrating the passing of her bones through the city.

The view from above looking down to the row of vendors selling cheap wares to tourists. It reminded me of something in the Bible about Jesus going to the Holy Temple in Jerusalem and tearing down the stalls selling cheap good to the pilgrims. The stalls line the road for a mile or so.

This was our last stop for the day and I felt as if it deserved it’s own special story. It was a great trip, and like I’ve said before there were too many things to put into one post.