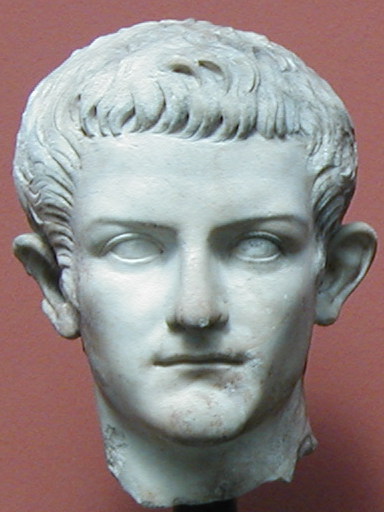 When people think of evil Roman Emperors, Caligula tends to come pretty high up the list. He was only the third emperor that they had had, so the prospects for what was to come did not look all that promising! 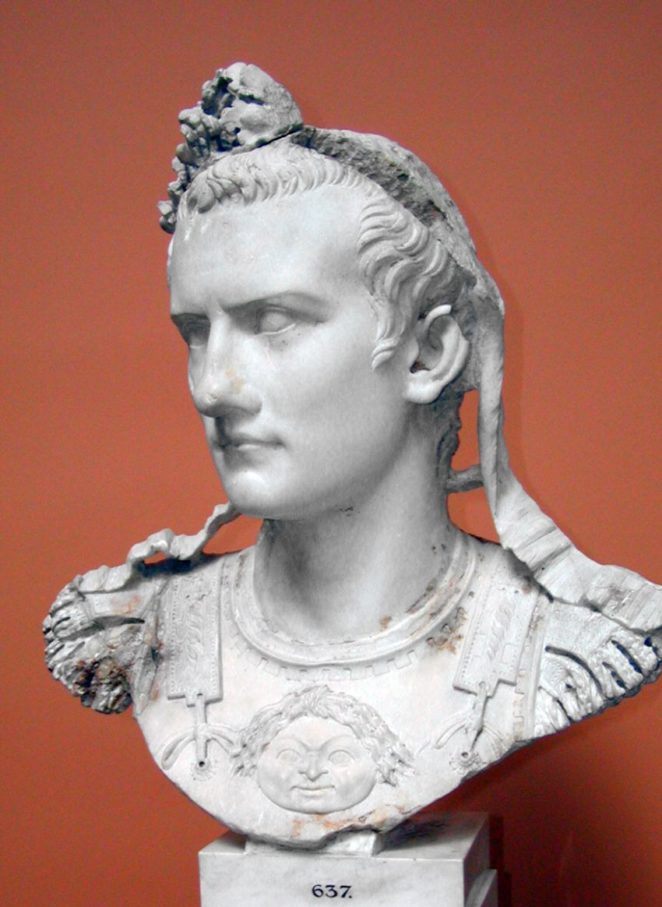 Caligula was a nickname for Gaius, the son of Germanicus and Agrippina. He was born in 12 AD and brought up among the legions in Germany. It was the soldiers who named him Caligula, from his habit of wearing small soldiers’ boots, or “caligae”.

His childhood was marred by tragedy. Germanicus, his father, died (possibly murdered) when Caligula was seven years old, and Agrippina his mother was banished by Emperor Tiberius, along with her two other sons. All three had died untimely deaths before Caligula became Emperor in 37 AD.

Caligula, however, was favoured by Tiberius and it was generally assumed that he was being groomed for the succession. The last years of Tiberius’s reign, when he had retired to the island of Capri and left the government largely in the hands of the hated Sejanus, were marked by murder and violence, and the prospect of young Caligula becoming Emperor was greatly welcomed.

There is a possibility that Caligula himself hastened Tiberius’s death by smothering the old man when he appeared to be making a recovery after being thought to be dead, but there is no way of being certain about this.

He got off to a good start by pardoning all the people who had appeared as witnesses or accusers against members of his family, and promising the Senate that he would rule according to the laws. He also behaved wisely and generously in foreign affairs.

However, eight months into his reign he suffered a serious illness after which his character changed completely. Various theories have been advanced as to what this illness was, including meningitis and encephalitis, both of which can have lasting effects on the brain. Other theories are that he had suffered from epilepsy or hyperthyroidism from childhood and the illness simply made their effects worse.

Whatever the cause, Caligula was now a changed man. One of his first deeds was to put to death several people who had, in public prayers to the Gods, offered their lives in exchange for his recovery. He forced several members of his own family to take their own lives, and he ordered people to be tortured to death in front of him while he took his meals. At one celebration of games in the Circus, he ordered many of the spectators to be thrown to the lions, simply for his amusement.

He became extremely licentious, bedding any woman who took his fancy, married or not, and these included wives of Senators and even his own sisters. He married several times and dissolved the marriages almost immediately. The only woman who exercised any influence over him was his last wife, Caesonia.

He declared himself to be a god, setting up a temple to himself and acting as his own high priest, alongside his horse, Incitatus. There is some doubt as to whether Caligula did actually raise Incitatus to the Consulship, or if he merely planned to do so. There is, however, documentary evidence that the horse was treated with every luxury and attended to by a staff of up to eighteen servants in a stable built of marble.

One of his ventures was to build a bridge of boats between Baiae and Puteoli, a distance of about three miles, which was covered with earth before houses were built on it. At the banquet held to mark its completion he had a number of guests thrown into the sea.

He was determined to prove himself as a military commander, plundering Gaul in 40 AD. He then marched his army to the sea, as if intending to cross to Britain and conquer it, but ordered his soldiers to gather seashells from the beach, claiming that he had thereby conquered Neptune, the God of the Ocean.

His activities not only terrified Rome but also emptied the Treasury. It was only four months after his return from Gaul, in 41 AD, that he was murdered by senior members of the Praetorian Guard, along with his wife and baby daughter.

Because Caligula had murdered most of his relatives by this time, but spared his weak and sickly uncle Claudius, who was regarded by Caligula as a figure of fun rather than a threat, it was to Claudius that the soldiers turned as Rome’s next Emperor. A terrible, but mercifully short, period of tyranny and madness had engulfed the Roman Empire. Whatever followed could only be an improvement.