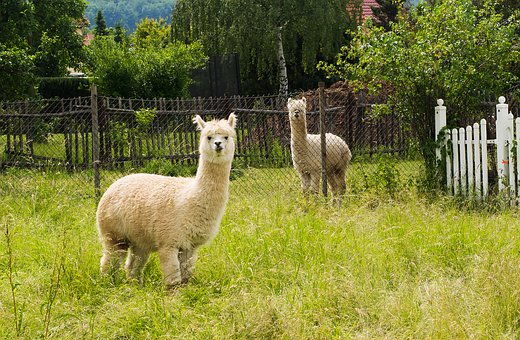 Sometimes mistaken as a llama, the alpaca is a species of South American camelid.  Other members of this family include camels, vicunas and guanacos.  Alpacas are much smaller than llamas and are not bred to be used as working animals; they are bred for their fiber (fleece).

Alpacas are kept in herds in the Andes of Southern Peru, Western Bolivia, Ecuador and Northern Chile at an altitude of 11,500-16,000 feet.  Alpaca fiber is used for making knitted and woven items and is similar to sheep’s wool but is warmer, is soft and luxurious, not prickly, and does not contain lanolin so it’s hypoallergenic.

An alpaca is approximately 32-39 inches high at the shoulders and generally weighs between 106 and 185 pounds.  The fleece comes in more than 50 natural colors.  Alpacas have been domesticated for thousands of years; and the Camelidae family first appeared in the Americas 40-45 million years ago.

The sounds that they make are humming, snorting, grumbling, clicking, screaming and screeching.

We have an alpaca farm down the road from us; and it’s always enjoyable to see which color alpaca is visible.  They have off-white, black, brown and cinnamon-colored animals.  When the animals are not sheared, they look very similar to the alpacas in the picture.  They look much thinner after their fleece is sheared.