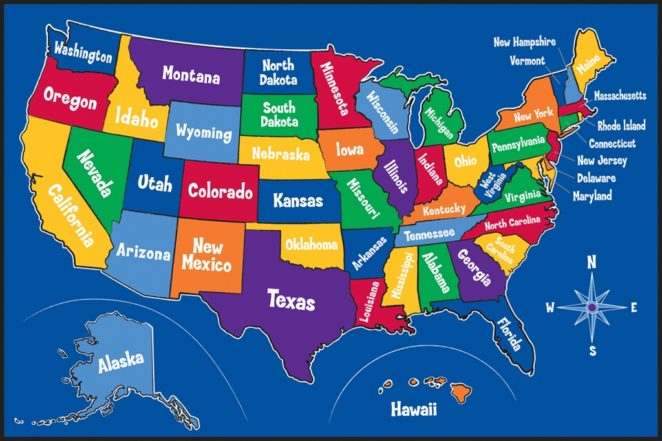 This is the final post of this series. I hope you have learned a few things. I have, doing research for the states has taught me a lot. Even though I live in the US, there is so much more to learn.

1. During the period of World War II, there was a secret bomber-making factory south of Seattle, Washington. To hide the factory, Boeing camouflaged it by entirely covering it with a fake neighborhood created by a Hollywood set designer!

2. There are plenty of states across America which are home to volcanoes – active or otherwise – Washington included. The Ring of Fire refers to 10 volcanoes that line the state.

3. You may not think of Washington as a beachy state due to its rainy weather and cold winters. However, it beats California and Florida for having the longest continuous beach in the United States in Long Beach Peninsula.

1. Love your mother? Then you should probably respect West Virginia: Mother’s Day was first observed at Andrews Church in Grafton on May 10, 1908.

2. West Virginia takes apple pie, apple picking, apple sauce, and pretty much every else apple to the next level of awesome: the original Grimes Golden Apple Tree was discovered near Wellsburg.

3. The first federal prison exclusively for women in the U. S. was the Federal Industrial Institution for Women in Alderson. Recognize the name? Among its inmates was Martha Stewart, the celebrity homemaker.

1. The typewriter was invented in Milwaukee in 1869.

2. The term “cheesehead” actually started as a term the German soldiers used to insult the Dutch during World War II. These days, the term is used in a bit more endearing way to describe cheese-lovin’ Wisconsites. The first cheesehead was worn at a Brewers game, not a Packers football game, and was a couch cushion with holes burned in the foam and painted yellow.

3. Wisconsin’s state symbol, the badger, doesn’t refer to the animal but instead to the 1820s lead miners who traveled for work and dug tunnels to sleep in and keep warm, much like a badger.

1. The first Dude Ranch is the Eaton Ranch. They were the ones who came up with the term “dude”.

2. The total land area covered by Yellowstone National Park is 3,468.4 square miles. 96% of this area is found within Wyoming while the other parts are situated in Montana (3%) and Idaho (1%).

3. In 1925 Mrs. Nellie Tayloe Ross of Wyoming, became the first woman governor in the United States.